Israel Resorts to UN to Calm Its Regional Fears

TEHRAN (Basirat): The recent victories achieved by the Lebanese Hezbollah Resistance Movement against ISIS terrorists have frightened the Israeli regime so much that it is asking the UN to help allay its fears. 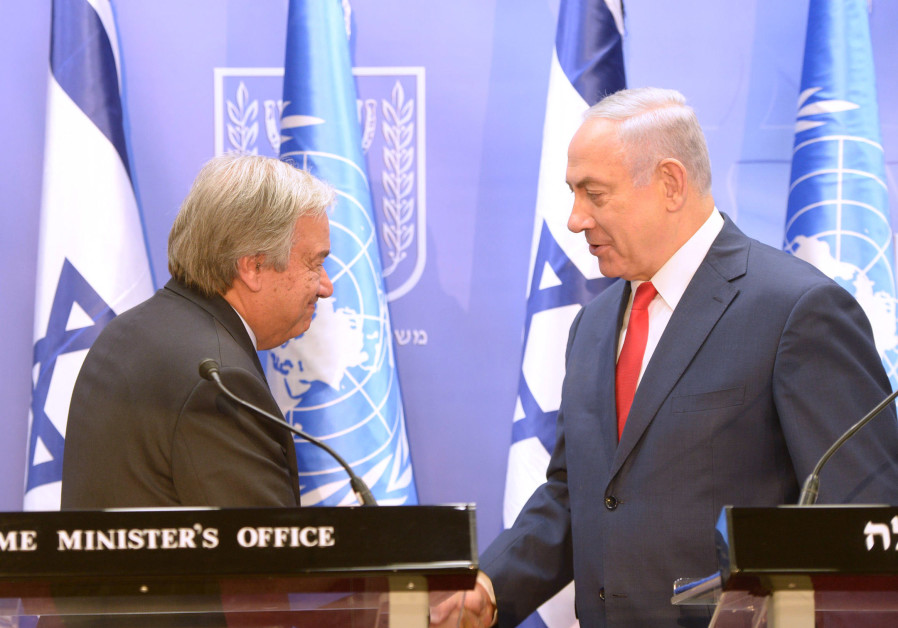 Last week, UN Secretary General António Guterres arrived in the occupied lands of Palestine for the first time during his term to hold talks with Israeli and Palestinian officials. The three-day visit came as the UN Security Council is working on a plan to renew the mission of its peacekeepers in Lebanon known as UNIFEL. The body is expected to vote on the plan on August 30.

The US Ambassador to the UN Nikki Haley recently criticized UNIFEL for what she called closing its eyes on Hezbollah’s weapons in Lebanon.

However, the significance of the UN chief’s visit to the Palestinian territories lies in his several and concise meetings with the Zionist officials during which the Islamic Republic of Iran was blamed for its role in the region.

During his meeting with the UN head, Israeli Prime Minister Benjamin Netanyahu accused Iran of seeking to establish two centres in Lebanon and Syria to produce guided missiles. He blamed the UN for remaining silent towards the plan and stressed Israel cannot sit idle towards Iran’s growing influence in Syria and Lebanon. The Israeli official added the UN also closes its eye to the conspiracies hatched by Iran and Lebanon’s Hezbollah against Israel.

According to the Jerusalem Post, Netanyahu stressed that Israel preserves the right to defend itself and doesn’t allow Iran and Hezbollah to tighten their siege on Israel. He also noted that Hezbollah and Syria are the biggest challenges that Israel is facing today.

The statements come as earlier, during his joint visit with the UN chief to a museum called Holocaust museum, the Israeli official warned that Iran is trying to turn Syria into a military base.

Israeli Minister for Military Affairs, Avigdor Liberman, also echoed Netanyahu’s claims about Iran’s decision to set up missile centres in Syria and Lebanon and added Israel cannot put up with the idea.

He went on saying that Israel is prepared to hit back at any security threats and claimed, "Today we are in a dangerous situation because Iran is seeking to deploy its forces in Syria and change the strategic balance of the region to undermine Israel.”

Interestingly enough, the so-called "diplomatic” meetings were attended by Israel’s military intelligence Chief, Herzi Halevi. During one of these meetings, Helevi briefed the UN chief on the latest development in the region and said Hezbollah has expanded its domination over the government of Lebanon.

He said further measures must be adopted to prevent a new war from taking place in the future. The Zionist general stressed that "Iran’s efforts to produce sensitive weapons for Hezbollah within Syria and Lebanon is a dangerous move which Israel will not sit idle against it.”

The meeting was also attended by the UN’s envoy to the Middle East as well as Israel’s ambassador to the UN and a top manager of Israel’s foreign ministry for international organizations.

But the main issue is that the harsh stance of Israeli officials towards Iran taken under the pretext of Iran’s efforts to establish military bases in Syria and Lebanon reveal the deep worries of the Zionist regime about Iran. Meanwhile, they also show that Israel is seeking to change the current political and security balance in the region in its own interest.

So, this means that first of all, with the victories of Hezbollah over ISIS in Syria, Israel has been focused on changing the power balance in the region and beginning a new tactic in the region by accusing Iran and Hezbollah of sponsoring terrorism. This paves the way for more serious presence of the US and the West in the region. And, secondly, as part of a pre-emptive measure, the Israeli officials are planning to raise their security by preventing the axis of resistance from expanding in the region.