TEHRAN(Basirat): Referring to the role of Saudi Arabia and Israel in ongoing massacre against Rohingya Muslims in Myanmar, Bankok- based geopolitical researcher Anthony Cartalucci believes these Washington proxies are paving the way for the US military presence on the China borders 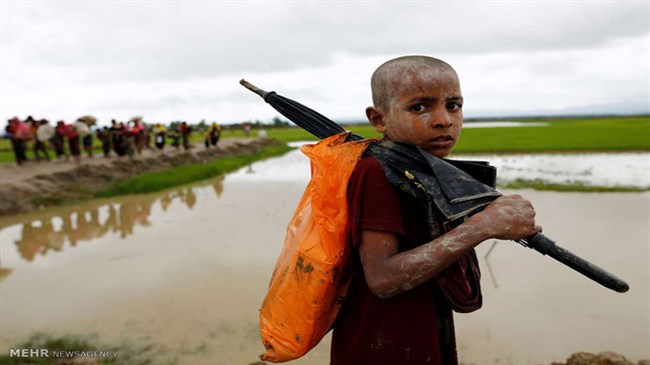 Myanmar's population is overwhelmingly Buddhist and there is widespread hatred against the Rohingya Muslims, who are denied citizenship and labelled illegal "’Bengali’ immigrants, MNA reported.

The grievous situation of 1.1 million Rohingya Muslims in the wake of a new wave of violence that broke out on August 25 after decades of ethnic tensions in the Rakhine state of Myanmar has managed to make headlines all across the globe. The world’s most persecuted people, Rohingya Muslims have been subjected to mass killings, systematic discrimination, and rigid restrictions, with their rights to citizenship, freedom of movement and access to medical aid, education and other basic services all denied.

According to the reports, at least 400 people were killed during the outbreak of violence two weeks ago. UN said during this time, 146,000 people have fled to Bangladesh due to widespread persecution by Myanmar security forces, and has estimated that the number of refugees would double.

To shed light on the real reasons of the recent violence against Rohingys Muslims, one newspaper reached out to Bangkok-based geopolitical researcher Cartalucci. Is ongoing massacre of Muslims in Myanmar an example of genocide based on international rules?

Whether or not, genocide as defined by international law is taking place in Rakhine state, Myanmar. Those groups perpetrating violence against the Rohingya minority maintain genocide as their primary objective. This is not specifically the national army carrying out the violence, but hard-line nationalist groups ― many of whom support the current head of state, Aung San Suu Kyi — who have a long history of instigating violence and sectarian division in Myanmar. In many instances before Suu Kyi came to power, the military has attempted to quell the violence. Since nationalists made up a large bloc of Suu Kyi's supporters, it was anticipated years ago that her ascension to power would be quickly followed by severe anti-Rohingya violence, even genocide.

It is said that Saudi Arabia and Israel are behind the story. What do you think of this?

Saudi Arabia is being implicated in funding a relatively recent militancy allegedly representing Myanmar's Rohingya. However, this group consists of a foreign-funded and led cadre and no more represents Myanmar's Rohingya than Al Qaeda or the Daesh terrorist group represents Sunni Muslims in Syria or Iraq. Just as Saudi Arabia is assisting the United States in the Middle East ― fueling terrorism to divide and destroy states as well as serve as a pretext for a US military presence in the region Saudi Arabia is attempting to create an artificial militancy in western Myanmar to likewise give the US a pretext for placing military assets in a nation that borders China.

Placing US troops in Southeast Asia has been a long-term goal of US policymakers for decades and the arrival of terrorism in the form of the Islamic State in the Philippines and this Saudi-backed militancy in Myanmar poses as the perfect engineered pretext for doing just that. With US forces in Southeast Asia, China will be further encircled and contained by US interests and power projection.

Israel always plays as a complimentary bookend to American strategies of tension across from nations like Saudi Arabia ― posing as ‘arming’ the Myanmar government to further inflame the Muslim World and heighten irrational, emotional division both inside Myanmar's borders and well beyond them. In reality, Israel sells weapons all over the world and the Myanmar government receives a small fraction of its arms from Israel. The vast majority of its inventory consists of Russian and Chinese weapons, with Israeli arms a negligible contribution to its potential fighting capacity.

We can recall how in 2011 Israel posed as ‘backing’ every government under siege by US-backed ‘protesters’ and militants from Hosni Mubarak in Egypt, to Muammar Qaddafi in Libya. In hindsight such notions of Israel genuinely supporting any of these governments is ridiculous. In 2011, such rumors spread like wildfire, creating automatic hysteria across the Muslim World and poisoning good will toward governments the US and its Israeli proxies actually sought to topple. Similar deception and emotional hysteria is apparently being used to deepen the confusion and crisis surrounding Myanmar today. What is the responsibility of international bodies, specifically the UN, to stop the massacre?

Observing how international institutions have handled other crises including Libya and Syria, or even in regards to US aggression and subversion targeting Iran, it is clear that the smaller the role these institutions play in Myanmar the better. They serve only as a vector for the special interests that dominate discourse within their halls — particularly the United States and its European allies.

Any involvement by the UN beyond providing the most basic relief and shelter for victims will likely compound the conflict.

Surprisingly, the head of state of Myanmar, Aung San Suu Kyi who was awarded the Noble Peace Prize has kept silence on the ongoing crimes of the army. Why?

The current head of state of Myanmar is Aung San Suu Kyi, who is not technically president, but rather ‘State Chancellor’ after creating an office for herself to preside over the nation from. Her Nobel Peace Prize is a result of US and British lobbying to bolster her and her political allies and create a substantial client regime to rule over Myanmar.

Much of her support base consists of racist, ultraviolent nationalists who are the primary perpetrators of violence against the Rohyingya population.  Her ‘silence’ is complicity and constitutes appeasement toward her own support base without which she would not be currently in power.

The United States and the United Kingdom intentionally placed her and her nationalist supporters in power with full knowledge of the violent crackdown they would subject the Rohingya population to. Simultaneously with Saudi Arabia's ‘expertise’, militancy has been introduced under the guise of a backlash from among the Rohingya. This ensures maximum and sustainable conflict fueled from both sides the US can leverage to both pressure the international community and special interests in Myanmar aligned with and against Suu Kyi's government to accept a permanent US military presence in Myanmar or even possibly the partitioning of Myanmar's territory.

The ultimate goal of this geopolitical act of arson is to disrupt substantial Chinese interests in the country, which include significant infrastructure projects ranging from ports and dams, to pipelines, roads, and railways. It is no coincidence that Sittwe Port developed by China sits right in the middle of Rakhine state where the current crisis is unfolding. The US, Saudi Arabia, and Israel are currently working on creating a socio-political narrative to distract public attention on all sides away from the actual geopolitical objectives the US is attempting to achieve in Myanmar vis-a-vis China by creating and expanding this crisis.

Cartalucci is a geopolitical researcher and writer based in Bangkok, Thailand. His work covers world events from a Southeast Asian perspective and promotes self-sufficiency as one of the keys to true freedom.