"US Will Have to Stay Outside Iranian Missiles Striking Range": IRGC

TEHRAN (Basirat) :The IRGC chief-commander says the US will have to relocate its bases to areas outside the striking range of Iranian missiles if anti-Tehran sanctions are re-imposed. 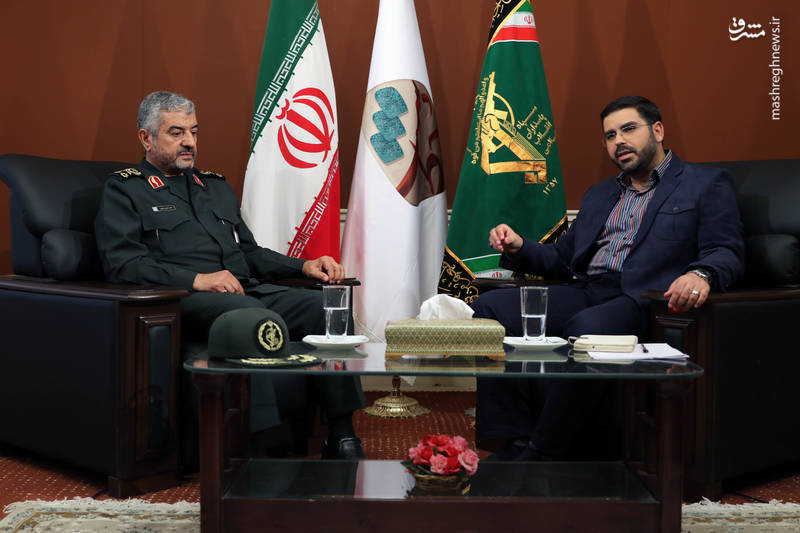 The commander of Iran’s Islamic Revolution Guards Corps (IRGC) Major General Mohammad-Ali Jafari has warned the United States against implementing its new sanctions against Iran.
"As we used our missile capability in striking terrorists in Syria’s Deir ez-Zor, we will use this capability wherever necessary. We have already warned the Americans that if they put into force the new sanctions they have ratified in the defense and arms sector, then they should remove their bases from within the range of our missiles,” the top commander told state TV.
He also weighed in on the possibility of the IRGC targeting ISIS command centers again.
"We use it (our missile capability) wherever necessary, especially with regard to those who must understand and feel threatened by this capability of the Islamic Republic of Iran,” said General Jafari.
"One of the points I mentioned is that if the enemy wants to implement fresh sanctions in the defense, arms and missile sector under different pretexts, we will respond to that. We have announced that the enemy should keep its distance; the US, in particular, should stay away from the borders of the Islamic Republic of Iran,” the commander noted.
"They should stay outside the range of our missiles, i.e., two thousand kilometres from the borders of the Islamic Republic of Iran. This is not an issue which we would compromise on, or which we would back down from,”
He also touched upon the IRGC’s presence in the Persian Gulf.
"Now, the whole world knows that the economic lifeblood of the world is the oil which passes through the Persian Gulf, and in this sensitive bottleneck, they (IRGC troops) should take care of the forces which secure regional security, namely Iran and the other countries in the region,” said the Iranian commander.
He further touched upon the arrest of US Marines on Farsi Island.
"After the incident that happened to US Marines on Farsi Island last year, they are seeking to make up for the blow that they suffered; this way, they want to maintain their power. Of course, it is natural that they are flexing their muscles, but when our drones fly over their warships, and people have seen their films and images, which show they can’t do a thing, this shows the power of Iran and the IRGC in the Persian Gulf region.”
On the situation of the ISIS terrorist group in the region, he said, "Fortunately, given the efforts made, the days of ISIS are numbered. ISIS is a sworn enemy of Islam, a handiwork of global hegemony and the Zionist regime of Israel to counter the Islamic Revolution and regional nations. Its remnants exist in desert areas near the Syrian and Iraqi borders, which will be purged as well, God willing,” said the top general.
"The ISIS is not something that will be completely annihilated in Iraq; rather, it might continue to exist sporadically in some areas and create insecurity for Iraq and its people where natural and human geography makes it possible [for the terrorists to do so.]”
"Also in Syria, only a few areas are left to be purged of ISIS terrorists. The al-Nusra Front and other [terrorist] groups are there in western Syria, but the conspiracy itself has been thwarted,” the top general underscored.
He then expressed his viewpoint on the possible threats that ISIS and other Takfiri terrorists may pose in the future.
"What kind of threats they will pose in the future is not predictable. They may not stay in areas which are not under their control, but they could merge with [and hide among] the population. It is natural that it takes years to identify and counter them by collecting full intelligence and doing intelligence work on populations, unless they choose other countries for their bothering moves. This will go on; in other words, they will continue to make attempts to counter countries which seek independence and which wouldn’t like to work in coordination with the US and Israel. Muslims should be prepared to deal with this new phenomenon, he added.
The top general then weighed in on the IRGC’S offering assistance to other countries.
"The help we can offer is to share ideas and experience; the least assistance would be to contribute troops and human resources. And they don’t need it either because they have enough troops and armed popular forces, but they may not have training and may need to draw on our experience, which is a major contribution that Iran can make.
"It is also natural and common to offer weapons and facilities, and like other countries, we help friendly nations as well as our neighbors at the request of their governments.”