Time for American Occupying Troops to Leave Iraq and Syria

TEHRAN (Basirat):US Secretary of State Rex Tillerson has a lot on his plate these days. While anticipating an end to the fight against ISIL, he said Sunday it was time for Iranian-backed militias to exit the war-torn nation of Iraq. 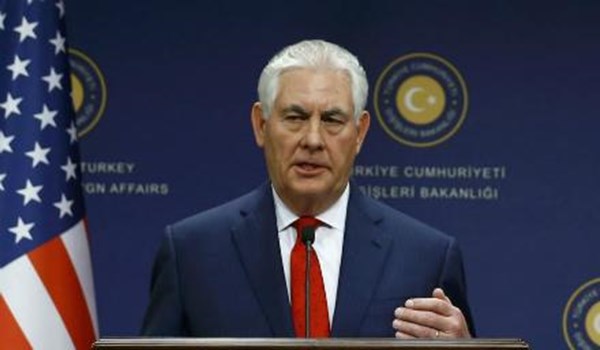 Tillerson added, "Those militias need to go home. Any foreign fighters in Iraq need to go home and allow the Iraqi people to regain control of areas that had been overtaken by ISIL that have now been liberated. Allow the Iraqi people to rebuild their lives with the help of their neighbors."
That these ridiculous statements were designed to appease the House of Saud because Tillerson was speaking in Riyadh alongside the Saudi foreign minister days after US-backed proxies declared the capture of Raqqa, ISIL's de facto capital in Syria, is not the point here. The argument is that US occupying forces have no right to remain in Iraq because people there don’t want them and because they have no invitation from the central government in Baghdad. They also have no right to occupy Syria for the same obvious reasons.
Quite the contrary, Iran has no militias in Iraq or Syria. It has military advisors supporting the governments there and combating ISIL upon official requests from Baghdad and Damascus. The reason the US under President Donald Trump has assumed a more aggressive posture towards Tehran, with Trump recently threatening to exit a multilateral agreement with Iran over its nuclear program, is that Iran’s unconditional support in the war against ISIL and other American terror proxies has paid off – something the War Party in Washington and its regional allies never anticipated when their creation ISIL conquered large swathes of land in the Levant equipped with American weaponry and Saudi cash.
That also says why Tillerson is now warning countries from doing business with the Islamic Revolution Guards Corps (IRGC), an Iranian military body that helped the armed forces of Iraq and Syria dislodge ISIL fighters from many cities and towns when Washington was looking the other way and its terror proxies were busy committing human rights abuses and war crimes, or sowing instability throughout the region and beyond - even launching terror attacks in Europe.
Which leads us to this inevitable conclusion: It is the United States which has been destabilizing the Middle East and whose forces need to leave the region - and not Iranian forces which are sacrificing their lives to defeat terrorism and restore peace and stability throughout the region and beyond.
The US and its allies are solely responsible for all the divisions among Muslims. They blame the victim of imperialism as the Israelis blame the Palestinians for the latter’s chronic subjugated condition. It is hypocritical for Tillerson and other Western politicians, the media and analysts that reflect "fakestream” views to argue that Iranians – or the IRGC –create instability and political problems in Iraq and Syria.
The US has created a monstrous mess in the Middle East. This is in part because it has been trying unsuccessfully to determine the regional balance of power where Iran is at the core in the region. One result of US destabilization policy is ISIL. It is reprehensible that Washington and apologists of Western imperialism without any sense of historical context and self-criticism insist that the ongoing violence is a problem solely created by Iran and its allies - and not ‘militias’. Without the American-Saudi money, guns and ammunition, political support, and covert operations to facilitate such operations intended to secure the goal of regime change how far would ISIL and Al-Qaeda succeed in carrying out their operations?
No one should be surprised at the arrogance of American politicians and well-paid consultants and analysts echoing official policy when it comes to the Middle East and victim blaming which is official policy in Washington and Tel Aviv and adopted by both Republican and Democrat politicians and the "fakestream” media. This is archaic imperialist mindset applied by the West to the non-Western world dating back to the era of European colonialism.
US volte face from collaboration with ISIL terrorists to confrontation is all too familiar a story as well. Even as the US and the West in 2015 publicly proclaimed their resolve on the war on terror and opposition to ISIL in Iraq, they were still backing the same terrorist groups and Qaeda-linked proxies in Syria.
When ISIL bombed a civilian Russian plane in over northern Sinai on 31 October 2015, followed by an attack on Hezbollah in Beirut two weeks later, Western governments and media had no problem because the targets were pro-Assad. In fact, the Western media criticized President Vladimir Putin for striking ISIL targets, prompting the US to assist ISIL indirectly by providing air cover to protect certain pro-West assets in Syria along the Turkish border. Always reflecting US official position, the "fakestream” media sent the message to the world that the problem at hand was really Iran, Putin, Assad, and Hezbollah rather than the barbaric ISIL that Russian fighter planes were targeting; that is until the Paris massacre.
Washington’s double-standard behind which rests the destabilization policy as a priority is still revealing. It is one reason that prompts the allied forces of Iran, Russia, Hezbollah and Popular Mobilisation Units to continue to support the national armed forces of Iraq and Syria to fight foreign-backed terrorism and extremism to the end.