TEHRAN (Basirat) : Hassan Ghashghavi, the deputy foreign minister for consular and expatriates affairs, has said that so far more than 1.1 million visas have been issued for pilgrims who are planning to visit Iraq to observe Arbaeen. 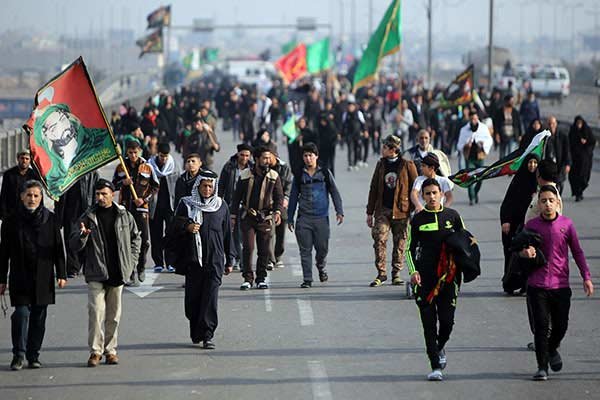 Undeterred by the threat of Islamic State militants, hundreds of thousands of pilgrims gather in the Iraqi holy city of Karbala to mark Arbaeen which marks the end of a 40-day mourning period for the martyrdom of Imam Hussein (AS), the grandson of the Prophet Mohammad (S), in 680 AD.
Last year about 2.5 million Iranians visited Iraq to mark Arbaeen. Iranians start crossing the border days before the holy day.
Ghashghavi also said some 500,000 Iranian pilgrims are expected to travel to Iraq through the Khosravi border crossing.
Earlier this week, Ghashghavi rejected reports that Iraq has removed visa requirements for Iranian pilgrims, stressing that all visitors need visas from the Iraqi government to cross the border.
Iranian police have warned that anybody who visits Iraq without visas will get a three-year prison sentence.
Every year millions of Muslims march toward Karbala in one of the biggest marches in the world. The marchers make their way to the city of Karbala, 62 miles southwest of Baghdad.
The pilgrimage is far larger than the Hajj pilgrimage to Mecca in which around 1.5 million people take part.
Large crowds visit the shrines of Imam Hussein and his half-brother Abbas in Karbala, where they were martyred in a revolt against the Umayyad ruler Yazeed in the 7th century AD when they refused to pledge allegiance to Yazeed's Umayyad caliphate.
Last year about 20 million people took part in the ceremony. Many choose to make the journey on foot, despite travelling near ISIS-controlled areas in the country.
Mohammed Shomali, director of the Islamic Centre of England has said, |For Muslims and non-Muslims, the sacrifice and noble message of Imam Hussein represents the peace and virtue of Islam, which prevented Hussein from resorting to violence or capitulation.”
"This is why non-Muslims as well as Muslims of different sects and denominations have been able to gather together for this event in Iraq and globally - Hussein's decision not to submit to the will of violence is a model all of humanity can replicate.”