London and Paris Playing on the White House Ground

TEHRAN (Basirat) :Johnson's recent remarks are a symbol of lies and trickery rooted in English politicians conduct. This conduct has long been experienced by English officials for decades. Not so long ago, Jack Straw and Hammond were the symbols of this trick, and now Johnson's turn has come to complete the task of his predecessors! 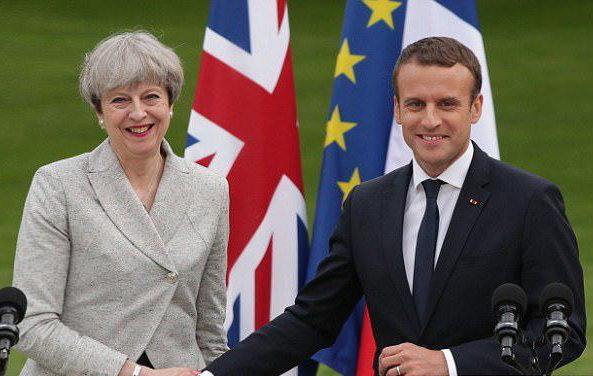 In his latest remarks, the British Foreign Secretary has emphasized the need to maintain the nuclear deal with Iran. This is while English authorities welcome the change of the JCPOA along with Trump. Johnson recently stated that the British government encourages foreign investment in Iran:

"The central core of the deal, which is a bargain on Iran's good behavior in relation to its nuclear program and its economic development, has not changed, and the President of the United States has not canceled or torn off the nuclear deal with Iran. As long as Iran is committed to the JCPOA, we should be witnessing economic interactions and progress. It is important for the Iranian people to be able to touch the interests of the JCPOA, and it is very important that we continue to work on trade and investment between the two countries."

Johnson spoke of investing in Iran in a situation that the British Foreign ministry has recently called our country a challenging place for trade, calling on British businessmen and investors to take caution about investing in Iran and make the necessary consultations. In this regard. Boris Johnson, after the controversy in the tramp, said that the US Congress was not about to cancel, but to change.
British tactics at the current time, is the normalization of changing the Joint Comprehensive Plan of Action. In other words, Britain, in line with the United States and France, wants to distinguish between the two options of "cancellation" and "change" of the JCPOA, while there is practically no difference between the two options. U.S. media have long reported that Britain has welcomed the idea of a renewed nuclear deal. In such a situation, Johnson's recent remarks are a symbol of lies and trickery rooted in English politicians conduct. This conduct has long been experienced by English officials for decades. Not so long ago, Jack Straw and Hammond were the symbols of this trick, and now Johnson's turn has come to complete the task of his predecessors!
Johnson, on the other hand, has argued that the central core of the JCPOA (based on economic give and take with Iran in turn of limiting our nuclear deal) has not changed! This claim is not accepted by the English authorities. Recently, the Foreign Minister of our country in New York emphasized that, despite the passing of two years, we have not been able to open a simple account in the UK. In what circumstances does Johnson speak of "give and take"? Johnson himself knows well that the United States, and in particular the Treasury Department, has prevented lifting the sanctions on Iran. England has playing side by side with the United States in this game
Ultimately, the recent statements by the British Foreign Secretary are an obvious deception, in other words, a rush ahead of London over their pledges of the nuclear deal. Today, the Iranian people are more than ever aware of the mischief of the United States and its allies, including Britain, towards the nuclear deal.
The French President Emanuel Macron has also taken a controversial approach to Iran's nuclear deal. He insists on being an "intercessor" between Iran and the United States at the current stage, and on the other hand is considered one of the main sponsors of changing the nuclear deal. In other words, Macron intends to implement Trump's demands regarding the change of the nuclear deal. France is also one of the main proponents of Iran's missile defense capabilities.
In his latest remarks on the JCPOA, the French President has pointed to tangible subjects. Emanuel Macron, who is scheduled to travel to Iran for consultations with Iranian government officials, says:
"We agreed with the U.S. government that all measures to maintain the nuclear deal with Iran would remain." Today, the vague strategy of the United States against Iran and North Korea requires more integration of the European Union. Despite my full respect for the JCPOA, we are opposed to the development of Iran's missile program and will soon be discussing this issue with other European leaders."
The reality is that the game played by France regarding the JCPOA, not only doesn't actually differ from that of the United States, but is even more dangerous in terms of lack of transparency. France is a member of the P1 + 5 and is, of course, a permanent member with the veto power in the UN Security Council. Even before Trump's speeches, France has shown the green light to Washington for imposing changes in the nuclear deal.
Under such circumstances, it would be better if Macron does not take a supporting gesture towards the nuclear deal and openly discuss his positions on renegotiating the nuclear deal! The paradoxical and non-transparent positions of the French authorities regarding the JCPOA must be answered by the diplomatic and foreign policy apparatus of our country. Obviously, France, like the United States of America, has to make a choice between the two options of "thorough acception of the current version of the nuclear deal" or "withdrawing from the JCPOA".
It's time for our country's diplomacy to take a clear approach to France, asking Paris to stop its dualism, and choose one between the two choices. Undoubtedly, if Paris continues to play on the ground of the United States, it will also be part of the JCPOA cancellation. The recent gesture that the French authorities have taken is completely rejected and unacceptable. Obviously, in such circumstances, we must speak with clarity and openness to the French officials. It seems that as time passes, the conduct of French politicians will be more complicated and, of course, more dangerous. As a result, the French authorities should be asked to clarify their explicit standpoints as soon as possible.