Another regional war would be catastrophic for Saudi Arabia

TEHRAN(Basirat): The countries behind the regime-change drive in Syria have invested a vast amount of resources and political capital in their pursuit of the "New Middle East". 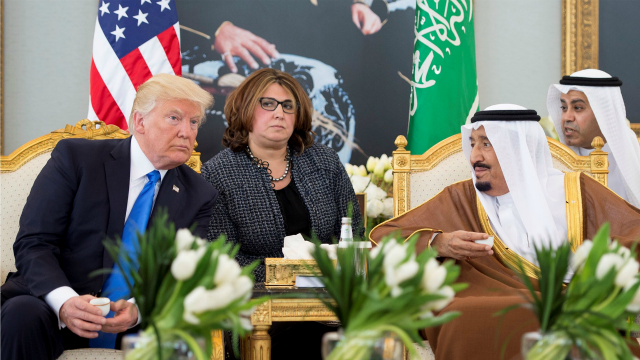 The royals in Riyadh, who played a key role in what eventually morphed into a regional conflict, were hoping to achieve a long list of regional and domestic objectives, including dealing a blow to the Iran-Syria-Hezbollah alliance.

Indeed, more than six years of turmoil have given birth to a new Middle East - it just isn't the one that the Americans, "Israelis" and Saudis were hoping for.

With Iran and its allies emerging as the regional powerhouse, tantrums by politicians in Washington, Tel Aviv and Riyadh are becoming increasingly frequent.

The most recent jolts in Riyadh are only the latest reminder of just how bad things have gotten for the Saudis and their partners.

During a mere few days of back-to-back developments, Saudi Arabia's crown prince Mohammed bin Salman purged the royal family of potential opponents, forced the Lebanese premier to resign, declared war on Lebanon and threatened to do the same to Iran.

The seismic events have given way to anxiety over the possibility of a new regional conflict, with Lebanon finding itself in the eye of the storm.

But away from the all the rhetoric and grandstanding, the new realities on the ground can hardly be perceived as encouraging for Salman and his partners.

On the domestic front, Salman's pre-emptive coup, which is tantamount to a war within the House of Saud, has eclipsed the kingdom's power-sharing formula, a guarantor of its survival over the years.

At a time when Saudi Arabia is struggling with a declining economy and a catastrophic military campaign in Yemen, Salman's purge is certain to alienate the regime's traditional pillars.

Powerful enemies, combined with growing public discontent over the looming 5-percent value-added tax, government austerity measures, and delays in the government paying its debts to companies, are increasingly reminiscent of a rebellion in the making.

In short, Saudi Arabia is headed for further instability, and even without the additional burden of new regional conflicts, Salman's ability to survive his own ‘vision' for the future is highly questionable.

"They are claiming through their propaganda machine that the young prince is trying to clean the political arena in Saudi Arabia and fight corruption but Saudi Arabia is a state of corruption," said London-based author and journalist, Aly el-Kabbany.

"There was anger and expanding opposition among the royals, ex-ministers and businessmen because of the failing foreign policy of Muhammad bin Salman and because of the aggressive war against Yemen, which bankrupt the country and failed to achieve any of their objectives," el-Kabbany added.

Meanwhile, Yemen's Ansarullah movement, which Salman has been bombing for over two years, decided to showcase the unprecedented range of its ballistic missiles by targeting Riyadh's international airport.

Riyadh's response to the attack is as much about diverting attention away from its vulnerabilities when it comes to the war in Yemen as it is about fueling the anti-Iran crusade.

Saudi officials quickly connected the strike to Iran and Hezbollah. Riyadh proclaimed it an act of war for which they held Tehran and Beirut responsible and to which they vowed to respond.

The unsubstantiated allegations were a follow-up to the resignation of Lebanon's Prime Minister, Saad Hariri.

Announced by Hariri but scripted by Riyadh, the resignation was delivered from Saudi Arabia, where the Lebanese premier has been taken prisoner.

Hariri's kidnapping is a further testament to Riyadh's growing desperation. Not only has the move weakened Saudi ‘allies' in Lebanon, but it has also secured Hezbollah's role as the defender of Lebanon's constitution, championing calls for the return of a Sunni leader.

"We declare that the prime minister of Lebanon has not resigned," Sayed Nasrallah said. "Saad Hariri is our political opponent, but he is also our prime minister."

The Hezbollah leader explained that the Saudi plot also involved inciting "Israel" to strike Lebanon. However, Sayed Nasrallah downplayed the prospects of another war.

"Neither Saudi nor the US have taken on Hizbullah before, it will be "Israel" which talks them out of it, especially since both are relying on it to do their dirty work," Saad opined. ""Israel" was begging the US to repeal the nuclear deal with Iran precisely so it wouldn't have to take on Hizbullah again."

Saad believes that Riyadh's increasingly hostile posturing towards the Lebanese state is a "substitute for war, not a harbinger of it."

The coalition-building process between "Israel" and Arab monarchies in the Persian Gulf has been going on for quite some time.

The cementing of the alliance was spurred on by the fact that both "Israel" and Saudi Arabia lost in Syria, Iraq and Yemen. The two have had to pull their military, financial and diplomatic resources in the hope of retaining some of their regional clout.

In recent months, they have been shifting their attention toward Lebanon and away from Syria, where any kind of progress has been ruled out due to the presence of Damascus' allies - Russia, Iran and Hezbollah.

But Tel Aviv and Riyadh have learned the hard way that the ability of the resistance axis to absorb an attack is far greater than their own capacity to inflict real damage.

Saudi Arabia, which has brought the war in Yemen to its own capital, is incapable of directly challenging Iran militarily. And Tel Aviv cannot afford to ignore Hezbollah's newly acquired status as a regional power.

The stage may be set for a war that no one really wants, but the outcome of which can only have one conclusion - a catastrophic defeat for Saudi Arabia and its allies and their irreversible demise.