TEHRAN(Basirat): Tehran, Ankara and Doha signed a trilateral memorandum of understanding to boost trade with Doha amid a Saudi-led blockade on the Persian Gulf sheikhdom. 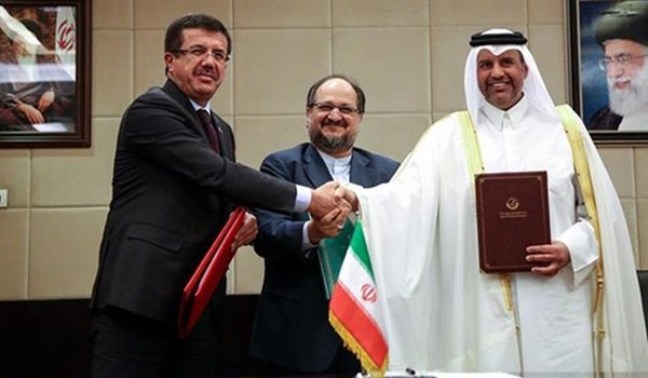 The measure would facilitate the process of transiting goods among the three countries, by tackling obstacles created to economically isolate Doha.

In a relevant development earlier on Sunday, Shariatmadari announced Qatar was eager to expand ties with Iran in all areas as a result of the current conditions that the Saudi-led blockade against it had created.

Back in June, Saudi Arabia, Egypt, Bahrain, and the United Arab Emirates imposed a trade and diplomatic embargo on Qatar, accusing Doha of supporting terrorism, an allegation strongly denied by the emirate.

The Saudi-led bloc presented Qatar with a list of demands, among them downgrading ties with Iran, and gave it an ultimatum to comply with them or face consequences. Doha, however, refused to meet the demands and said that they were meant to force the country to surrender its sovereignty.