HOME >>  HOME >> تیتر یک
News ID: 2869
The Leader in a meeting with participants at the International Islamic Unity Conference:

US, Israel, regional cronies seeking to sow discord among Muslims

TEHRAN (Basirat) : In a meeting with the heads of the three branches of the Iranian government, Ayatollah Seyyed Ali Khamenei reiterated, “To the US followers in the region, our language is one of advice and we have no intention of responding to some idiots, but we advise them that serving global tyrants is to their own detriment and as the Quran says, collusion with despots has no result but destruction.” 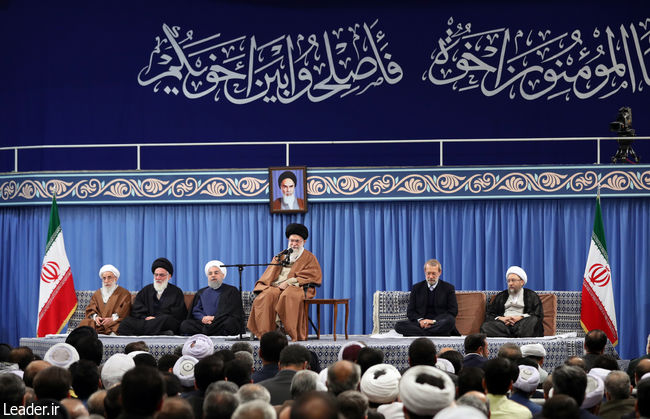 In a meeting with the heads of the three branches of the Iranian government, a group of establishment officials, ambassadors of Muslim countries and participants at the International Islamic Unity Conference on the occasion of the auspicious birth anniversary of the honorable prophet of Islam, the Prophet Muhammad (Peace be Upon Him) and Imam Ja’far al-Sadiq, the sixth Shia Imam, Leader of the Islamic Revolution Ayatollah Seyyed Ali Khamenei said deliverance from domestic, regional and global woes is contingent upon following the teachings of the last prophet and reiterated, "If the world of Islam wants power and glory, it should pursue unity and steadfastness.”


Congratulating the Iranian nation, the Islamic community and all of the world’s freethinkers on the auspicious festive occasion, the Leader of the Islamic Revolution reiterated, "The eminent Prophet of Islam was a blessing by God Almighty for all of humanity and obeying him will save the nations from the tyranny and arrogance of powers, class distinctions, cruel aristocracies and other woes and bondages.”

He pointed to God Almighty’s urging divine prophets and their followers to have perseverance and steadfastness as a prerequisite for victory, adding, "Today, also, steadfastness in the path of the eminent Prophet can thwart the major plots of global bullies.”

Ayatollah Khamenei described "the US, the Zionist regime, reactionaries and vassals of [world] powers” as "the present world’s pharaohs” and pointed to their efforts to sow divisions and start wars in the Muslim community, saying, "Some US politicians have intentionally or unintentionally acknowledged that wars and conflicts must be created in the West Asia region, so that the Zionist regime will enjoy a safety margin and the bloody body of the world of Islam will have no power of progress.”

The Leader of the Islamic Revolution expressed profound regret that some of the regional rulers are meeting the demands of the US, adding, "The Islamic Republic is not interested to have differences with Muslim governments and just as it has established unity and fraternity inside Iran, it also believes in, is keen on and pursues unity and unification in the world of Islam.”

He reiterated, "To the US followers in the region, our language is one of advice and we have no intention of responding to some idiots, but we advise them that serving global tyrants is to their own detriment and as the Quran says, collusion with despots has no result but destruction.”

By creating Takfiri gourps, Ayatollah Khamenei said, the enemies seek to incite a Shia-Sunni war, adding, "God Almighty has created our enemies ignorant, which saw the enemies of Islam fail in achieving their objective, i.e. the instigation of a sectarian conflict, and this will not be achieved in the future either, God willing.”

The Leader of the Islamic Revolution described "steadfastness” as the key to victory against savage Takfiris and added, "Our encounter with them was the clash against brutality and distortion of Islam and now, wherever their remnants may be, they are the agents of the US and Zionism and we will stand against them.”

He described the unity of the Muslim community and steadfastness against Zionism and other enemies of Islam as a cure for the sufferings of the world of Islam and the path to the acquisition of power and glory and reiterated, "The issue of Palestine tops the political issues of the Muslim community today and everyone is duty-bound to endeavor and struggle for the liberation and saving of the Palestinian nation.”

The Leader of the Revolution the recognition, by enemies of Islam, of al-Quds as the capital of the Zionist regime is rooted in their desperation and frustration, and added, "The world of Islam will undoubtedly rise against this plot and the Zionists will suffer a heavier blow with this move and the beloved Palestine will ultimately and surely be liberated.”

Ayatollah Khamenei praised the "courage, insight and perseverance of the Iranian nation” in navigating the very difficult mountain roads in the past four decades, adding, "The friends of the Islamic Republic across the world and the enemies of Iran must know that the problems ahead are certainly smaller than the problems of the past four decades and the Iranian nation will thwart them with greater might and will fly the flag of Islamic glory at highest summits.”

Prior to the remarks of the Leader of the Islamic Revolution, Iranian President Hassan Rouhani said the current problems of the world of Islam result from detachment from the Quran and the Revelation [of Quran] and added, "Today, the Muslim people of the region have achieved victory against terrorists and their arrogant and Zionist supporters and the enemies are conceiving new plots.”

"We should still be vigilant against the US, the regime occupying al-Quds and their cronies,” said Rouhani, adding, "The enemies have turned the region into a weapons depot by using Muslims’ public purse, and have stepped up their intervention in the region.”

Saying that at the height of Syria’s war against terrorists, the US bombed an airbase in this country to help Daesh and other terrorists, the president added, "Whenever a major victory emerged for the Syrians, the Zionist regime bombarded a part of the Syrian territory under whatever pretext.”

The president pointed to the new plot facing the world of Islam, adding, "al-Quds belongs to Islam, Muslims and Palestinians and there is no room for new adventurism by global hegemony.”

Rouhani said the lofty goal of Muslims is the liberation of al-Quds, adding, "The Islamic Republic of Iran is always after peace and stability in the region and is opposed to the shifting of geographical borders and, by supporting nations against terrorism, seeks the settlement of issues through negotiations and at the same time no Muslim nation, including the Iranian nation, will tolerate aggression by the hegemony and Zionism against Islamic sanctities.”

Stating that Muslims, including the Palestinian nation, must unanimously rise up against the great plot of declaring al-Quds as the capital of the Zionist regime, the president added, "Muslim countries and the Organization of Islamic Cooperation shoulder a heavy responsibility in this regard.”