TEHRAN(Basirat): A report has exposed how certain Arab states have continued to shower British politicians with luxury gifts in an attempt to curry favor and buy their support. 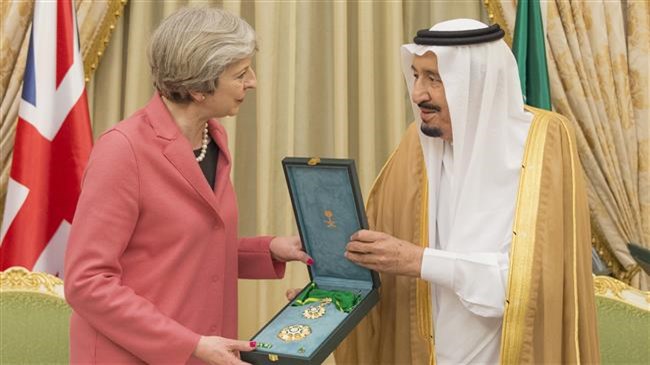 Prime Minister Theresa May, whom Saudi Arabia has conferred with the Order of King Abdulaziz Al Saud, has received several gifts from the kingdom, including an ornament, a clock, and a medal, the report said.

Saudi Arabia "has splashed out on 20 luxury Christmas hampers for Conservative Party ministers since 2010,” the MEE further reported.

The United Arab Emirates has also been providing British ministers with various gifts.

The emirates has offered luxury Christmas hampers, rugs, and a $2,600 designer briefcase to Tobias Ellwood, Britain’s defense minister. In December 2012, the country's government bought former British foreign secretary William Hague a rug and Alistair Burt, the UK’s Middle East minister, both a hamper and an Ipad.

In July, the Kuwaiti Foreign Ministry gave Burt a Rolex watch worth nearly $8,000.

Incumbent Foreign Secretary Boris Johnson was also once given a $400 box of Wagyu meat by the King Abdullah II of Jordan. Another Arab ruler gave the British minister tins of Caspian caviar, worth more than $1,000 in total, when they met the same month.

Since 2015, Britain has been providing state-of-the-art weaponry and logistical support to Saudi bombardment of Yemen, which also enlists the Emirati military. More than 12,000 have died since the bombing started.

The MEE cite rights campaigners as blasting the trend of the Arab showering of the politicians with gifts as a means of influence peddling by governments, some of whom have incurred huge international outcry over the human rights abuses at home and abroad.

"These gifts aren't being given out of any sense of generosity. They are being given to buy friends and increase influence," said Andrew Smith of Campaign Against Arms Trade (CAAT). "If repressive regimes and brutal dictatorships are giving gifts to Member of Parliaments, then it is time for those politicians to think about the messages they're sending out, and to stop offering such intimate political support to human rights abusers," he added.

Sayed Ahmed Alwadaei, director of the Bahrain Institute for Rights and Democracy, said, "Many of these regimes have consistently repressed democracy and violated human rights. These lavish gifts are a transparent ploy to influence the UK's foreign policy so that it favors the regimes rather than the people of the Persian Gulf."