HOME >>  HOME >> تیتر یک
News ID: 3058
Ayatollah Khamenei in a meeting with thousands of people from the city of Qom:

US cannot do a damn thing if officials remove flaws

TEHRAN(Basirat) :In a meeting with thousands of people from the city of Qom, Leader of the Islamic Revolution Ayatollah Seyyed Ali Khamenei appreciated and commended the huge, vigorous, timely and coherent movement of the nation in recent days and expounded on the various dimensions and layers of the enemy plots to exploit the rightful demands of the people. 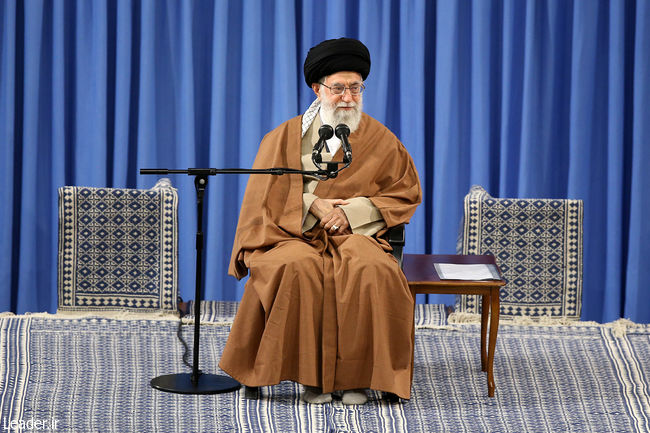 At the beginning of his remarks, the Leader of the Islamic Revolution commemorated the anniversary of the January 9, 1978 uprising and described the people of Qom as brave, brimming with motivation and hope and committed to the undeviating course of the Revolution. He said, "As in the previous years, the people of Qom took part in December 30 rallies, but when the recent developments occurred, they created that great movement four days later, namely January 3.”
Ayatollah Khamenei stressed that the assertion of the Iranian nation, particularly the youth, over the past 40 years has been "resistance against bullying and refusing to submit to [world] powers.” He added, "The Iranian nation still pursues its lofty goals with the same rationale but it is more motivated and spirited than before and the revolutionary youths of the country outnumber those at the outset of the Revolution.”
He described the events of the recent days as clear proof for this spirit of the Iranian nation, saying, "Since December 30, when the fireworks spectacle and acts of mischief began, the Iranian nation began their movement across the country, but when they saw that the enemy mercenaries are not relenting, the rallies continued successively and every day.”
The Leader of the Islamic Revolution stressed, "These rallies are not regular incidents and this huge, coherent, and popular movement with such order, insight, passion and enthusiasm against enemy plots is unique across the world.”
Describing the ceaseless movement of the nation, Ayatollah Khamenei said, "This is the battle of ‘the nation vs. the anti-[Iranian] nation,’ ‘Iran vs. anti-Iran,’ and ‘Islam vs. anti-Islam,’ which will also continue henceforth.”
He reiterated, "Of course, this battle, steadfastness and resistance has not distracted the nation from the other aspects of life, such as scientific progress, the provision of security and peace.”
Ayatollah Khamenei said "the Islamic Revolution” is the reason behind all hostilities and plots against the Iranian nation and reiterated, "All of the futile moves of the enemy in these 40 years are in fact a countermove to the Revolution, because the Revolution uprooted the political influence of the enemy.”

He said, "This time too, through their steadfastness like a national and strong bulwark , the Iranian nation with all might showed the US, the UK and London-dwellers that you did not succeed and will not succeed after this either.”
The Leader of the Islamic Revolution pointed to the billions of dollars of investment and years of network-building and mercenary-raising  by the ill-wishers of the Iranian nation to create problems from within the country and added, "Incumbent US officials, whose naivety is evident in political matters, gave themselves away this time and admitted to network-building and mercenary-rearing and paid for the expenses of this scheme by cheating the vassal Persian Gulf governments so that they may recycle the trash on the run from Iran and bring them into the arena again.”
Pointing to the bid by the enemies in recent years to launch thousands of cyberspace networks and then of television channels, create assassination and bombing squads and dispatch them inside the borders, and vastly bombard the nation with lies, slander and rumors, reiterating, "All of these efforts were made so that they may be able to change the mentality of this nation, particularly the youth, but its outcome was the beloved martyr Hojaji and other martyrs who sacrificed their lives in defense of the Revolution.”
He added, "In order to infiltrate some sectors, the enemies even enticed some individuals [to their bidding] and they also directly entered the fray themselves and everyone saw the meddling of US officials over the past few days, but they still did not succeed and failed.”