TEHRAN(Basirat): Lebanon’s Prime Minister Saad Hariri called for his county to be kept out of regional conflicts, lauding the Hezbollah resistance movement for doing its part to de-escalate the tensions. 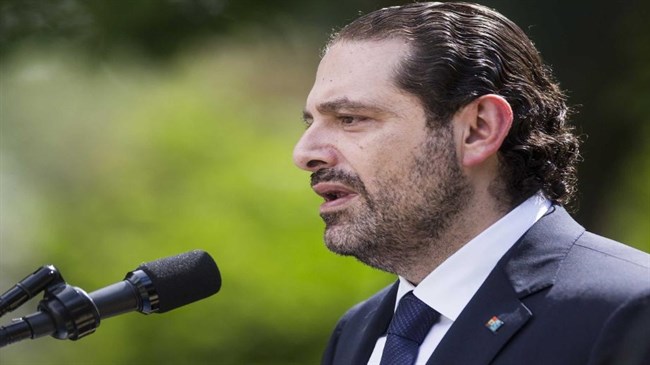 In an interview with The Wall Street Journal published on Thursday, Hariri said he was open to Hezbollah continuing to participate in the government following the elections slated for May.

"Hezbollah has been a member of this government. This is an inclusive government that has all the big political parties, and that brings political stability to the country,” Hariri said during interview, defying pressure from Saudi Arabia to confront the resistance movement.

"My main goal is to preserve this political stability for the unity of the country,” said Hariri, who reached a power-sharing deal with Hezbollah in 2016.

Hariri abruptly declared his resignation from Saudi Arabia and from Saudi-owned television on November 4, accusing Iran and Hezbollah of interfering in the region and signaling that that was his reason to quit.

But Lebanese President Michel Aoun, who suspected that Hariri had been forced to step down, refused to accept his resignation and demanded his return from Saudi Arabia first. Lebanese intelligence sources soon concluded that Hariri was under restrictions in Riyadh.

Sayyed Hassan Nasrallah, the Hezbollah secretary general, said back then that Saudi authorities had clearly and openly declared a war on Lebanon by holding Prime Minister Hariri hostage and forcing him to quit.

That drama ended when Hariri returned to Lebanon on November 22 — partially after a diplomatic intervention by France — and rescinded his resignation on December 5.

In the Wall Street Journal interview, Hariri declined to discuss the details of his stay in Saudi Arabia.

The Lebanese prime minister then outlined in his interview a vision under which Lebanon will finally focus on its own affairs and reject foreign interference.

"We cannot accept interference from anyone in Lebanese politics,” Hariri said, adding "Our relationship with Iran – or with the Persian Gulf – has to be the best relationship, but one that serves the national interests of Lebanon.”

Hariri further highlighted Hezbollah’s willingness to comply with a policy of "disassociating” Lebanon from regional conflicts.

Hariri, however, admitted that Hezbollah’s withdrawal from Syria will take time as the situation there is more complex.

Hezbollah has been helping the national Syrian army in the fight against terrorists in an effort to prevent the spillover of the crisis into Lebanon.

The Lebanese premier also cautioned Israel against any military action against Lebanon, saying any such war would be counterproductive.

”Every time, they say they [Israelis] want to launch a war with the purpose of weakening Hezbollah. And every single time they went to war with Lebanon, they actually strengthened Hezbollah – and weakened the state.”

Hezbollah is Lebanon’s de facto military power, and has been fighting off recurrent acts of Israeli aggression against the homeland. Riyadh, which reportedly maintains clandestine ties with Tel Aviv, however, has made no secret of its opposition to the group, and has been trying for more than a decade to weaken it.

Lebanon has repeatedly praised Hezbollah’s key role in the war against terrorism, with Lebanese President Michel Aoun defending the resistance movement’s possession of arms as essential to Lebanon’s security.