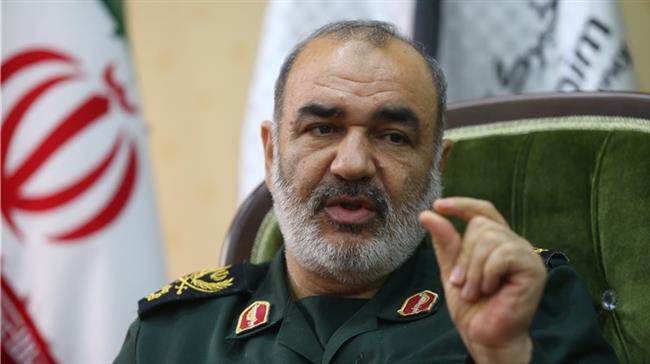 Speaking during a ceremony in the northwestern Iranian city of Urmia, West Azarbaijan province, on Saturday, Brigadier General Hossein Salami, the IRGC’s second-in-command, said the Iranian people have always been vigilantly present in all scenes, ISNA reported.

He added that enemies had hatched plots to partition the country with the purpose of undermining the Islamic Republic's independence, unity and territorial integrity.

However, all the enemies' plots against Iran have so far been thwarted thanks to the nation's bravery and the guidelines of the Leader of the Islamic Revolution Ayatollah Seyyed Ali Khamenei, the IRGC commander said.

"The enemies have so far experienced nothing but defeat at the hands of the Islamic establishment," Salami added.

He said the enemies had been seeking to wage psychological warfare against Iran to undermine the achievements of the Islamic Revolution but such a plot had also been foiled.

Elsewhere in his remarks, Salami praised Iran's great achievements in the sectors of science, technology and military, and said the Islamic Republic could compete with the world’s advanced countries in such areas.

Iran has one of the most advanced defense systems in the world, he said, adding that as part of the country's achievements, it has gained the capability to manufacture advanced radars, put satellites into orbit, build huge turbines and produce 98 percent of required medicine.

In recent years, Iran has made great achievements in its defense sector and has attained self-sufficiency in producing essential military equipment and systems.

Back in September, Salami highlighted the significance of maintaining security across the region, warning of the global arrogance’s plots to alter the world’s geopolitical map.

A senior IRGC commander says the global arrogance and its allies are making efforts to alter the world’s geopolitical map.

He added, "The global arrogance and its allies are making efforts to change the world’s geopolitical map.”