TEHRAN(Basirat): Visiting Iranian President Hassan Rouhani on Friday stressed the significance of forging unity among Muslims to tackle enemies and the Zionist regime of Israel. 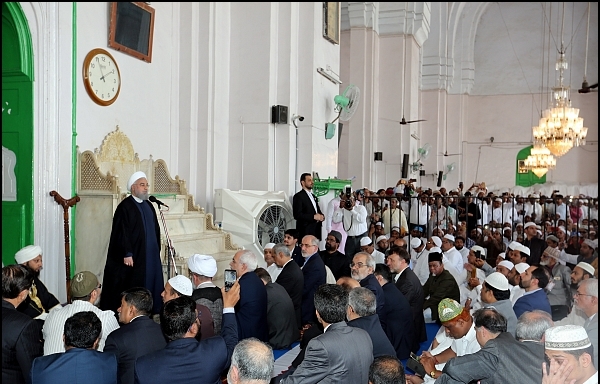 Addressing the Friday prayers in Hyderabad, southern India, President Rouhani said that not paying due attention to the Islamic teachings is considered the main reason behind Muslims' problems in some regions.

He also conveyed Iranian nation's greetings to Indian people, adding that attending the Friday prayers is vital for forging unity among Muslims.

President Rouhani arrived in Hyderabad on Thursday to meet with the senior Indian officials and sign documents on Iran-India trade and commerce cooperation.

The visit is taking place at the official invitation of the Indian Prime Minister Narendra Modi who visited Iran last year.

A large delegation from Iranian private sector businessmen and tradesmen are also in India as part of the President Rouhani's delegation.