TEHRAN (Basirat)- Saudi Arabia have admitted that they created ISIS in response to the U.S. support for the Da’wa – the Tehran-aligned Shia Islamist ruling party of Iraq – in a stunning admission that has gone virtually unreported in the mainstream press. 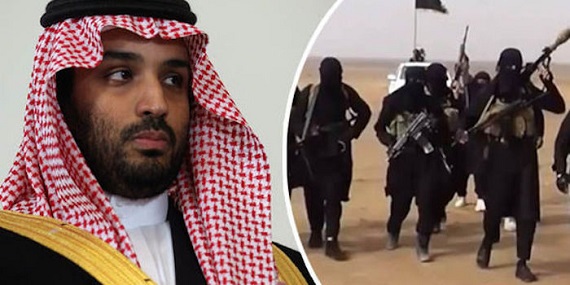 Saudi Arabia have admitted that they created ISIS in response to the U.S. support for the Da’wa – the Tehran-aligned Shia Islamist ruling party of Iraq – in a stunning admission that has gone virtually unreported in the mainstream press.

As Saudi-U.S. relations continue to deteriorate amid threats to de-classify 28-pages of the official 9/11 report, the FT have written an article that reveals yet another blow to diplomatic relations between the two countries.
As US President Barack Obama arrives on a valedictory visit to Saudi Arabia this week, that 70-year-old bargain looks frayed by fractious relations with a ruling House of Saud that is coming under unpredictable new management. The shale-based energy revolution meanwhile shows the potential to liberate the US from dependence on Saudi and Gulf oil. Mr Obama’s main foreign policy achievement, the nuclear deal struck last year between international powers and Iran, is abhorrent to Saudi Arabia, whose virulently sectarian Wahhabi interpretation of Sunni Islam abominates the Shia Islam of Iran and its Arab network of co-religionists from Baghdad to Beirut.
Zerohedge.com reports:
But it was not just Iran.
"Even when the Iran deal was only at an interim and fragile stage in 2013, the Saudis were so affronted they rejected a seat for which they had vigorously lobbied on the UN Security Council. But differences between Washington and Riyadh had been steadily accumulating — starting with the fact that it was mainly Saudi terrorists, on orders of the Saudi Osama bin Laden, who struck America on 9/11.”
However the real reason for Iraqi fury at Obama goes further back. In fact, it appears that all current events are shaped by the disastrous foreign policy of Obama’s early years, namely the US intervention behind the Arab Spring:
The Saudis could never reconcile themselves to the US-led invasion of Iraq, not because it toppled Saddam Hussein but because it led to Shia majority rule in an Arab country. When Hosni Mubarak was toppled by Egypt’s popular revolt in 2011, Riyadh accused Mr Obama of betraying a US ally. Saudi perceptions of US complacency in the face of Iran’s advances in Iraq, Syria, Lebanon and Yemen are a grievance far outweighing western perceptions of Isis jihadism as the main threat in and from the Middle East.
But the punchline: Saudi’s admission that it itself created Daesh, or ISIS. As for the twist: as the late Saudi foreign minister says, the Saudis only created ISIS in response to Obama’s disastrous policy in the region.
To wit:
After the Iraqi city of Mosul fell to a lightning Isis offensive in 2014, even the late Prince Saud al-Faisal, the respected Saudi foreign minister, remonstrated with John Kerry, US secretary of state, that "Daesh [Isis] is our [Sunni] response to your support for the Da’wa” — the Tehran-aligned Shia Islamist ruling party of Iraq.
And there you have it, and as a reminder, the person who was in charge of US foreign policy during this entire period was none other than…
But that is just part of the story.
As we revealed last year courtesy of leaked CIA documents, according to investigative reporter Nafeez Ahmed the "leaked document reveals that in coordination with the Gulf states and Turkey, the West intentionally sponsored violent Islamist groups to destabilize Assad, despite anticipating that doing so could lead to the emergence of an ‘Islamic State’ in Iraq and Syria (ISIS).
"According to the newly declassified US document, the Pentagon foresaw the likely rise of the ‘Islamic State’ as a direct consequence of the strategy, but described this outcome as a strategic opportunity to "isolate the Syrian regime.”
In other words, the Saudis may have created ISIS in response to US foreign policy, but this had been known all too well to the US from the beginning, who not only were "in on it”, but actively groomed the terrorist organization, ostensibly through a clandestine spy organization whose name is conveniently abbreviated to just three letters.

Which ultimately means that just like Al Qaeda was funded, i.e., created, by Saudi Arabia, so its replacement on the global bogeyman scale, the Islamic State terrorist are nothing more than conveniently puppets, played from day one by the interplay of Saudi and US national interests,(asipress) reported.