At White House Lie-In, Teens Call on Congress to 'Protect Kids, Not Guns'

TEHRAN (Basirat): "We call on President Trump and leaders from both parties to finally act in the interest of America's youth and end these tragic mass shootings." 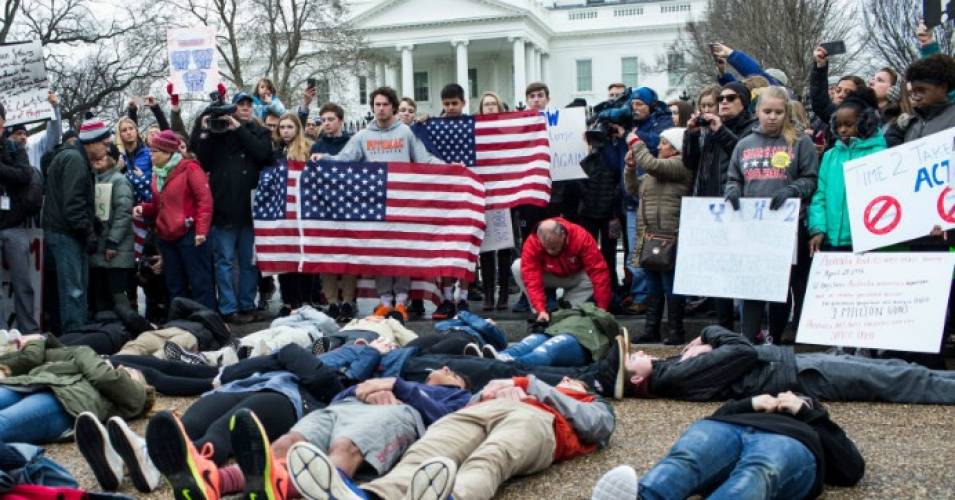 Building on the nationwide mourning and outrage that followed a Florida school shooting last week that left 17 people dead, dozens of teenagers held a "lie-in" at the gates of the White House on Monday to protest years of congressional inaction on gun control and highlight the National Rifle Association's pernicious influence on the political process.

The demonstration began with protesters—many of them from the group Teens for Gun Reform (TGR), which organized the event—lying on the ground in front of the White House for several minutes, symbolizing "how quickly someone, such as the Parkland shooter, is able to purchase a gun in America."

"We have organized this protest in solidarity with all of those who were affected by the horrific school shooting in Florida," TGR said in a statement. "We call on President Trump and leaders from both parties to finally act in the interest of America's youth and end these tragic mass shootings. It is imperative that American children are safe in their classrooms, churches, malls, movie theaters, and streets."

Hoisting signs that read "NRA: There Is Blood on Your Hands" and "Protect Kids, Not Guns," demonstrators also directed "Shame on you!" chants at the White House.

But President Donald Trump—whose speech in the aftermath of the Florida shooting didn't mention guns once—was not in the White House to hear the chants or listen to the protesters' demands, as he spent President's Day playing golf at his club in West Palm Beach, Florida.