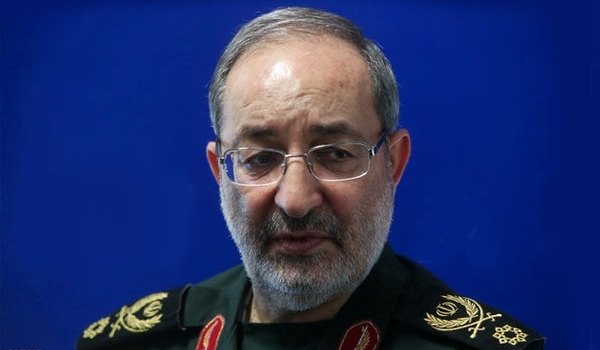 "Iraq's Hashd al-Shaabi (popular forces) is a new phenomenon and fully influential which entered the scene during the war against Iraq imposed by the terrorists who fought as a proxy of the US and the reactionary Arab regimes," General Jazzayeri said on Monday.

His remarks came after media reports said that the US congress is studying a bill which sanctions Iraq's Hezbollah al-Nujaba, a major Iraqi Shiite resistance movement fighting the ISIL, designating it as a terrorist group.

General Jazzayeri described al-Nujaba and other resistance forces as a thorn in the US eye, and said imposition of sanctions is no indication of Washington's power but is only a reaction to the emergence of a new power.

"If the resistance groups didn’t exist, the Zionist regime would plough the region to implement its plots," he added.

General Jazzayeri expressed confidence that the future belongs to Nujaba and other resistance groups as the US and the Zionists are losing their power.

The US sanctions issue was raised after Iraq's Al-Nujaba popular movement warned the American military men deployed in the country against their continued presence.

"If the Americans don’t leave Iraq, al-Nujaba will respond to them with weapons," Spokesman of the movement Abu Wareth al-Moussavi was quoted by the Arabic-language al-Nashrah news website as saying earlier this month.

"As we have fought for the establishment of Iraq's sovereignty, we will use our weapons to confront the occupiers too," he added.