Zarif Asks Europe to Stop US Games with N. Deal 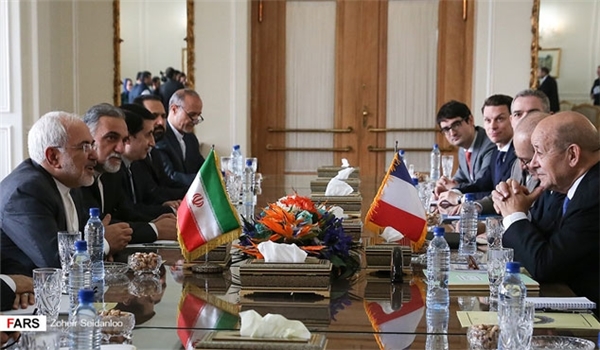 "The nuclear deal as a multilateral agreement whose success was also shared by Europe and (considering the fact that) Iran has fully been committed to it based on 10 reports by the International Atomic Energy Agency (IAEA) is now witnessing the US illogical gaming and politicizing and Europe can play a more constructive role to maintain this international achievement and, in addition to the full implementation of its own undertakings, pressure the US to comply with its obligations under the nuclear deal before anything else and not allow the US to raise irrational and illegal demands despite its disloyalties and violations," Zarif said in a meeting with French Foreign Minister Jean-Yves Le Drian in Tehran on Monday.
"The US has not only showed institutionalized non-committment to its undertakings but also prevented Europe from implementing its undertakings," he added.
Le Drian, for his part, underlined the firm decision by Europe, specially France, to respect, maintain and implement the nuclear deal, and their willingness to increase investment and trade cooperation with Iran.
Elsewhere, Zarif stressed Iran's willingness to exchange views with Europe to end the humanitarian crisis in the region, but, meantime, said, "If Europe's goal is propaganda or satisfying the US, we will not play this game."
He also referred to Iran's missile program, and said the issue is not related to the nuclear deal and even resolution 2231.
"The US and other countries which have turned our region into a gunpowder store by selling weapons should end these moves," Zarif said.
"Iran's military power is aimed at defending the country and deterrence and given the bitter experience of the imposed war (by Iraq in 1980s), Iran has learned to rely on its deterrence power to defend its citizens," he underscored.
In relevant remarks earlier today, Secretary of Iran's Supreme National Security Council (SNSC) Ali Shamkhani underlined the need for the European states to speed up full compliance with the 2015 nuclear deal, warning them not to be influenced by President Trump's psychological game.
"The logic behind any international agreement is the support of all sides and the international community for it and demanding one side to stay committed, while showing indifference to another side's defiance is not acceptable," Shamkhani said in a meeting with Le Drian in Tehran on Monday.
He also welcomed expansion of bilateral political and economic ties between Tehran and Paris, and stressed the necessity for accelerating removal of remaining obstacles on the way of banking exchanges after the nuclear deal.
"Failure of the nuclear deal will discredit international agreements and the logic of talks to resolve the global issues," Shamkhani said.
"Europe's policy of making concessions to the US to keep it in the nuclear deal is incorrect and means passivity and surrendering to Trump's psychological game," he added.