TEHRAN (Basirat) :Leader of the Islamic Revolution Ayatollah Seyyed Ali Khamenei has met with a number university and school students who are on convoys (known as Rahian-e Noor) going to visit former war zones in the south and southwest of Iran where Iranian forces fought off the Iraqi aggression in the 1980s. In the meeting, Ayatollah Khamenei described the Sacred Defense era (the eight-year Iraqi war) as a glorious and gilded chapter in the history of Iran and the Revolution. 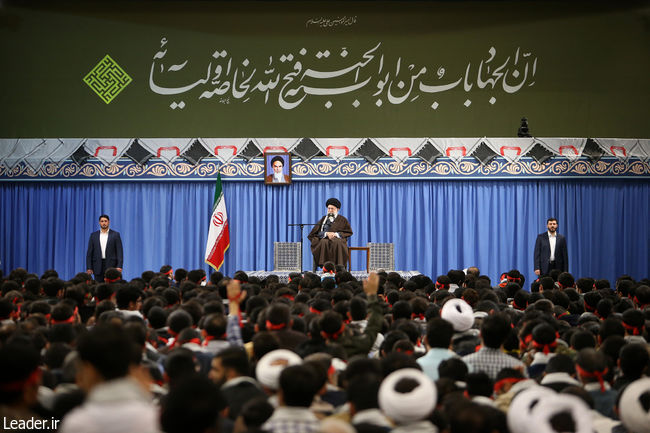 He stressed that Rahian-e Noor caravans are one of the manifestations of the commemoration of the era. He said, "International powers imposed the eight-year war on the Iranian nation with the goal of eliminating the Islamic Revolution; however, the greatness, sacrifice, faith, prudence, courage and insight of the youth saw the war end in the favor of the nation and caused the Islamic Revolution to grow more deep-rooted and stronger than before.”

The Leader of the Islamic Revolution said the country and nation owe their glory, might, security, independence and freedom and health to the eight years of Sacred Defense and added, "The Sacred Defense era is a reservoir which must, contrary to the will of the enemies who seek to consign it to oblivion, always be preserved and commemorated for the country’s progress, national growth and readiness of the people and youth in various arenas.”
He described the Rahian-e Noor convoys as a major popular campaign for keeping alive that great era and pointed to the various and untold dimensions of the Sacred Defense, adding, "One of these dimensions is the analysis of the ‘why’ of the beginning of the Imposed War and its reason must be sought in the greatness and grandeur of the Islamic Revolution and intimidation and trepidation of the powers dominating the world at the time.”
Ayatollah Khamenei stressed that the triumph of the Islamic Revolution in 1979 rattled the throne of the powerful in the West and East, reiterating, "With the spread of the culture of the Islamic Revolution in the region and among Muslim nations in those early years, domineering powers grew extremely concerned and sought to destroy the Revolution at whatever cost; therefore, they goaded Saddam [Hussein], who was an arrogant and brutal character, into launching the war and attacking Iran.”
He pointed to the extensive financial, arms and intelligence support by the US, Europe, particularly the UK, France and Germany, as well as the former Soviet Union for Saddam’s Ba’athist regime, saying, "In the mid-stages of the war, France provided its most advanced planes and helicopters to Saddam while Germany officially and openly gave him chemical substances and still 30 years after the end of the war, many survivors are grappling with their consequences and a great many were martyred because of those same toxic substances.”
Ayatollah Khamenei added, "In the face of this global support for the Ba’athist regime, the only things that the Islamic Republic of Iran had at its disposal were a faithful nation and a powerful leader such as the great late [founder of the Islamic Revolution] Imam [Khomeini] as a result of which all of the struggles of the satanic world powers hit a roadblock and the Iranian nation prevailed over all of the powers during the eight years of the Sacred Defense.”
The Leader of the Islamic Revolution cited the quality and type of the soldiers’ defense as another untold aspect of the Sacred Defense, stressing, "The defense of the Iranian nation’s youth in the eight-year war had exceptional features and characteristics, namely, ‘strong resolve and will,’ ‘ solid faith,’ ‘bravery and sacrifice,’ ‘ innovation and initiative’ and ‘supplication and spiritual invocation’.”
Ayatollah Khamenei described the Sacred Defense era as a human-making experience and added, "The likes of [martyrs] Hemmat, Kharrazi, Bakeri, Borounesi, Cheetsazian and thousands of other youths were ordinary human beings and the war turned them into great legends, undying figures and shining stars.”
Outlining the prominent features of the youths of the Sacred Defense era, the Leader of the Islamic Revolution said, "Worship, wisdom and prudence, courage and valor, resistance and sacrifice and insight were the outstanding features of these youths that had made lions by day and worshippers by night out of them and it was based on this fact that the late Imam, with his deep vision, described the raising of such youth as the greatest of triumphs.”
Addressing the youth, Ayatollah Khamenei reiterated, "The future of the country belongs to you. If you cultivate such characteristics in yourself, the country will certainly reach the peak of excellence and perfection in all fields in the near future.”
He added, "This nation’s enemies and ill-wishers did not even want the name of Islam and Revolution to survive and wanted the US to dominate all of the country’s affairs and continued their soft and hard attacks with this motive; however, today we are facing a generation whose faith, talent, prosperity and might is greater than those of the first [post-Revolution] generation and this generation is more prepared than other generations to drive back the enemies.”
The Leader of the Islamic Revolution stressed, "In the face of such youths and movements such as Rahian-e Noor, the enemy, like the past 40 years, cannot do a damn thing against the Iranian nation.”

Ayatollah Khamenei added, "Of course, there will be harassment and disturbance such as economic sanctions and malicious propaganda; however, these persecutions will not stop the great movement of the Iranian nation.”
At the end of his speech, the Leader offered some advice to the Rahian-e Noor caravans.
The Leader of the Islamic Revolution said, "All of the apparatuses should help this movement; the cultural and social aspects of Rahian-e Noor should be deepened, exaggeration must be avoided and faithfulness [to reality] must be observed in the narration of incidents and issues, the prominent events of the Sacred Defense era must be included in textbooks and the safety of the travelers in the Rahian-e Noor caravans must definitely be ensured.”
Prior to the remarks of the Leader of the Islamic Revolution, Brigadier General Bahman Kargar, the head of the foundation for the preservation of the works and promotion of the values of the Sacred Defense, described Rahian-e Noor as an asset for increasing the country’s defensive might and deterrent power, saying, "In the past [Iranian calendar year beginning March 21] around six million people, most of whom youths, visited 57 Sacred Defense monuments in seven provinces of the country.”