TEHRAN (Basirat): Andrew Korybko, a Moscow-based analyst speaking in a private capacity, believe that the Soviet decision makers became victim of American perfidy and psychological warfare and world leaders should learn that America always has a host of backup plans available to rely on in secretly increasing its strategic position to compensate for whatever it’s “compromising” on in public. 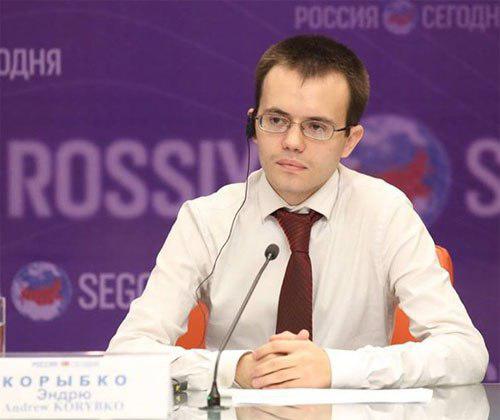 "No one should ever be under any illusions in thinking that the US negotiates from a position of weakness. Everything that it does is from a position of strength, even if it goes along with the prevailing notion sometimes deceptively disseminated by its own Mainstream Media outlets that it’s agreeing to something or another because it has no choice, such as the narrative that became popular around the time of the 2015 nuclear deal with Iran,” said Andrew Korybko in an interview with the Basirat Website.

"My impression is that Soviet decision makers, principally Gorbachev, were so enthralled with the "good guy” narrative that the US was spinning in framing them as "heroes of peace” if they agreed to these weapons cuts that they overlooked the fact that a lot of this was just psychological warfare to strategically disarm their suspicions and get them to enter into a never-ending pattern of retreating on all fronts,” he added.

Andrew Korybko is a political analyst, journalist and a regular contributor to several online journals, as well as a member of the expert council for the Institute of Strategic Studies and Predictions at the People’s Friendship University of Russia. He specializes in Russian affairs and geopolitics, specifically the US strategy in Eurasia. His book is "Hybrid Wars: The Indirect Adaptive Approach to Regime Change”.

Basirat: In spite of the intense US-Soviet struggle during the Cold War, the United States started to negotiate with the Soviet Union. What goals did the US consider?

Korybko: The arms control negotiations of the late 1980s and early 1990s were conducted by the superpowers after they were no longer in the same state of strategic balance and near-equal strength as they were around the time when the 1972 Anti-Ballistic Missile (ABM) Treaty was signed. That agreement sought to greatly limit the areas covered by either of their anti-missile defense systems and remained in effect until the US unilaterally withdrew from it in 2002. It was fair to both the US and USSR, just like the SALT I and SALT II of the same year and 1979, respectively, that saw each side equalize the number of launchers that they deployed.

These agreements didn’t have any ulterior motives that could easily be exploited by either of them, unlike the deals that would come afterwards.

By the time of the mid-1980s, the USSR was negotiating from a position of domestic institutional weakness brought about by its liberalizing policies of glasnost and perestroika dramatically backfiring and completely destabilizing the country, which made it very vulnerable to external American pressure. The US identified the structural shortcomings of the Soviet system even beforehand and knew that it could catch Moscow in a trap by aggravating the arms race precisely at the moment when the USSR could least afford it given the plethora of problems that it was experiencing.

Washington wanted to force Moscow to choose between maintaining its costly nuclear arsenal during a time of ever-expanding socio-economic crises or voluntarily reducing it in order to divert the funds elsewhere, which ultimately led Soviet decision makers to agree to decrease their nukes alongside the US. The catch, however, was that the US was also developing game-changing but non-nuclear strategic weapons such as those associated with the over-hyped "Star Wars” program that it presented as being able to one day overcome the USSR’s nuclear capabilities.

This meant that the Soviets basically froze the nuclear balance in place with the Americans but gave up on participating in the conventional arms race that stood to tip the strategic balance to the US’ favor with time. As it happened, the USSR dissolved in a few years after the 1987 Intermediate-Range Nuclear Forces Treaty (INF) and just months after the START I agreement, and the newly independent successor state of the Russian Federation was unable to compete with the US on the same global level as the Soviet Union once did.

Basirat: Did the United States adhere to its commitments in the nuclear deal with the Soviet Union?

Korybko: To an extent – on paper, the US adhered to SALT I and SALT II, and START I has gone down in history as being extremely successful in eliminating most of the world’s nuclear weapons, but in practice, "Star Wars” and related strategic non-nuclear weapons programs sparked a new arms race that the Soviets couldn’t afford to participate in. Moreover, the US unilaterally withdrew from the ABM in 2002, and the cumulative consequences of these moves are why Russia dedicated itself to researching and developing hypersonic weapons such as the ones recently unveiled during President Putin’s landmark speech last week in order to restore the strategic balance between these two Great Powers.

Basirat: Can such examples be found in other agreements between the United States and other players?

Korybko: No one should ever be under any illusions in thinking that the US negotiates from a position of weakness. Everything that it does is from a position of strength, even if it goes along with the prevailing notion sometimes deceptively disseminated by its own Mainstream Media outlets that it’s agreeing to something or another because it has no choice, such as the narrative that became popular around the time of the 2015 nuclear deal with Iran. It may not be immediately apparent, but America always has a host of backup plans available to rely on in secretly increasing its strategic position to compensate for whatever it’s "compromising” on in public.

Basirat: Why did Gorbachev and Edward Shevardnadze think that agreements with the United States could serve the national interests?

Korybko: Those two figures were proverbially gored on the horns of a dilemma and had little choice under the circumstances. Around the time that the USSR committed to the INF and START I, it was already hemorrhaging massive amounts of money because of the Afghan Intervention and socio-economic turmoil caused by glasnost and perestroika, all of which led to an uncontrollable explosion of political instability within its borders. The multisided internal and external pressure being put on the Soviet Union was too much for it to bear, and the state was bound to step back and enter into concessions on any number of fronts, which ultimately led to its unravelling.

At the time, though, they thought of this as a tactical tradeoff for alleviating the American pressure on their country and allowing the state to divert nuclear-related financial resources to projects that they expected might calm the domestic situation in the country, though the US was relentless and kept pushing the USSR until it finally fell apart. The US will always intensify its subversive efforts against its adversaries whenever it senses weakness since it thinks that it might be only one move away from destroying them, or as is more often the case, trapping them in such a controlled scenario where they basically "destroy themselves” instead.

Basirat: Please let me to ask a tough question. If you were in this position, would you be willing to negotiate with the United States?

Korybko: It’s difficult to say because I’m not privy to all of the knowledge that they were informed of at the time, and as the saying goes, "hindsight is 20/20”. There are arguments that can be made from either position. On the one hand, negotiating with the US came off as weak and was motivated by a level of political naiveté that was previously unseen, though on the other, the successful implementation of the ABM and SALT I and II suggested that the INF and START agreements might also be to each party’s balanced interests instead of at the expense of one or the other.

Unfortunately, my impression is that Soviet decision makers, principally Gorbachev, were so enthralled with the "good guy” narrative that the US was spinning in framing them as "heroes of peace” if they agreed to these weapons cuts that they overlooked the fact that a lot of this was just psychological warfare to strategically disarm their suspicions and get them to enter into a never-ending pattern of retreating on all fronts. Having said that, it’s difficult to see what difference it would have made if the USSR didn’t agree to those deals because it was eventually dismantled from within for reasons unconnected to those agreements but nevertheless still influenced by the US.

Basirat: In a book published in 1999, Ms. Saunders talked about the role of the CIA and its influence in the various levels of people, elites, and statesmen in orchestrating the collapse of the Soviet Union. Please kindly talk about this strategy.

Korybko: I’m unfamiliar with her work, but in brief, there’s a long-standing suspicion that some people within the Soviet hierarchy knowingly sold out to the US, though I think that the truth is more nuanced in that they fell for the CIA’s influence operations and operated exactly like how Washington wanted them to under the carefully controlled circumstances that America engineered around them. That’s not to say that "everything” that "went wrong” was an "American plot”, but just that one of the most important objectives that any intelligence can aim for is to exercise "scenario superiority” where they masterfully manipulate their targets into situations that are mostly beyond the participants’ control and largely influenced by external parties, though with all of the variables interacting in such a way that the decisions that each subject takes are genuinely thought to be their own and to their self-interest.

The objective is to manufacture a self-sustaining cycle of destruction whereby the targets ruin themselves through decisions that they truly believe are of their own making and in support of their interests under the circumstances.

It’s that dynamic which more accurately reflects the role that the CIA played inside of the Soviet Union in indirectly orchestrating its collapse than any effect that its individual agents could have ever had in directly executing this plan.