TEHRAN(Basirat): President Hassan Rouhani on Tuesday opened a new train line, linking a major city near the border with Iraq to the national railway network. 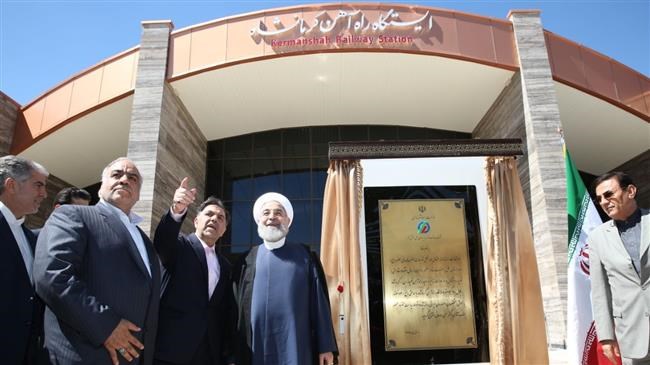 The railway to Kermanshah in western Iran ended 27 years of anticipation for the mainly-Kurdish city to have an alternative transportation mode and for the project to be completed.

It needed 175 kilometers of track laying across a difficult terrain which included building three kilometers of tunnels and seven large bridges, director of the project Nureddin Gandomi told reporters in Kermanshah.

"This is one of the strategic projects of the country which is about to connect to the Khosravi border” with Iraq, he said, explaining that work was already underway to extend the line.

Gandomi said ticket sales will begin from March 26, with trains leaving Kermanshah twice a week for the holy city of Mashhad in northeast Iran.

Minister of Petroleum Bijan Zangeneh, who has his roots in Kermanshah, and several other ministers and senior officials accompanied Rouhani in the opening.

Kermanshah is the latest remaining provincial capital to join the national railway network. The cities of Rasht and Urmia are next to connect with the grid in the coming months, before Ardabil, Sanandaj and Bushehr round up the plan.

On Sunday, Minister of Roads and Urban Development Abbas Akhundi said Iran needed $50 billion of investment for the modernization and expansion of its railway network in the next 10 years.

"The development of the rail network is far behind the roads network in Iran, and we have a big gap in this area, while rail transport is safe, healthy, green and environment friendly,” he said.

"We have proposed that all the provincial capitals join the rail network by the end of the 12th administration (in 2021), and that we experience the development of railway-based cities where we will witness the expansion of suburban rails in major cities for the first time,” Akhundi added.

In recent years, the country has signed a number of railway expansion or modernization agreements with foreign companies.

Another Chinese company signed a deal with Iran's Ministry of Roads and Urban Development to build a railway between the cities of Shiraz and Bushehr in the country's south with $700 million of investment.

In July 2017, Iran’s state rail company and its Italian counterpart signed a final agreement worth 1.2 billion euros ($1.37 billion) to build a high-speed railway between the cities of Qom and Arak.

Later that month, French transport company Alstom signed a joint agreement for the construction of subway carriages in Iran.