TEHRAN (Basirat): Leader of the Islamic Revolution Ayatollah Seyyed Ali Khamenei says resistance is the sole way to save the oppressed Palestinian nation. 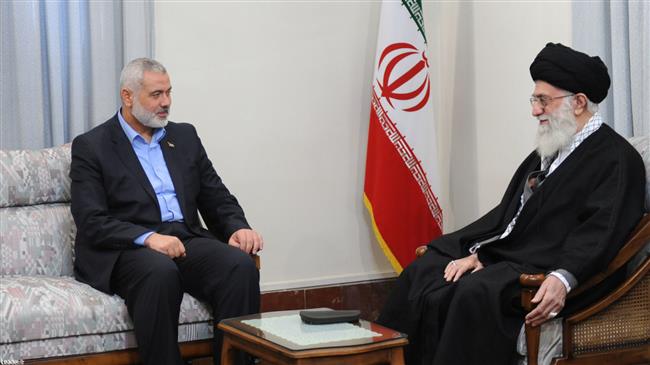 In response to an earlier letter from Ismail Haniyeh, the head of the political bureau of the Palestinian resistance movement of Hamas, Ayatollah Khamenei on Wednesday reaffirmed Iran’s unwavering support for Palestine and Palestinian fighters, and noted that strengthening the resistance front in the Muslim world and intensifying the fight against the occupying regime of Israel and its supporters were the solution to the Palestinian issue.
"The path of negotiation with the deceitful, liar and usurper [Zionist] regime is a big unforgivable mistake that will delay victory for the Palestinian nation and will bring about nothing but loss for the oppressed nation,” the Leader said.
"Undoubtedly, fighting and resistance are the only way out for the oppressed Palestine and the sole remedy for healing the wounds of this brave and proud nation,” Ayatollah Khamenei added.
The Leader said the Islamic Republic felt duty-bound to fully support Palestine.
Ayatollah Khamenei also underlined the need for the Islamic unity in the face of recent Zionist atrocities against Palestinians.
"Today, a return to dignity and power of the Islamic Ummah exclusively hinges on resistance against the global arrogance and its malicious plots,” the Leader said, noting that the Palestinian issue was the top priority of the Muslim world.
The nations and especially the zealous youths in the Muslim and Arab countries as well as the states that feel responsible for Palestine must take this great task very seriously and force the enemy to retreat to the point of demolition through their epic and wise fight, the Leader said.
This came amid Israel’s recent killings of more than a dozen Palestinian protesters in the besieged Gaza Strip.
On March 30, Gazans marched to the fence with the occupied lands at the start of a six-week protest, dubbed "The Great March of Return,” demanding the right to return for Palestinians driven out of their homeland.
The first day of the demonstrations turned violent after Israeli forces used tear gas and live fire against the Palestinians, killing 18 and injuring almost 1,500 others.
Prior to the mass demonstration, the Israeli military had deployed special forces, including 100 snipers to Gaza’s border, and authorized its forces to open fire on unarmed protesters.
Multiple human rights organizations have come out in full condemnation of Israel’s violent raids on the civilian mass protests in the besieged sliver.