Sayyed Nasrallah: Resistance able to strike any target inside Israel / Berri our candidate as house speaker

TEHRAN(Basirat): Hezbollah Secretary General His Eminence Sayyed Hassan Nasrallah delivered on Sunday a speech in which he addressed a huge electoral rally held in the Southern Lebanese city, Tyre. 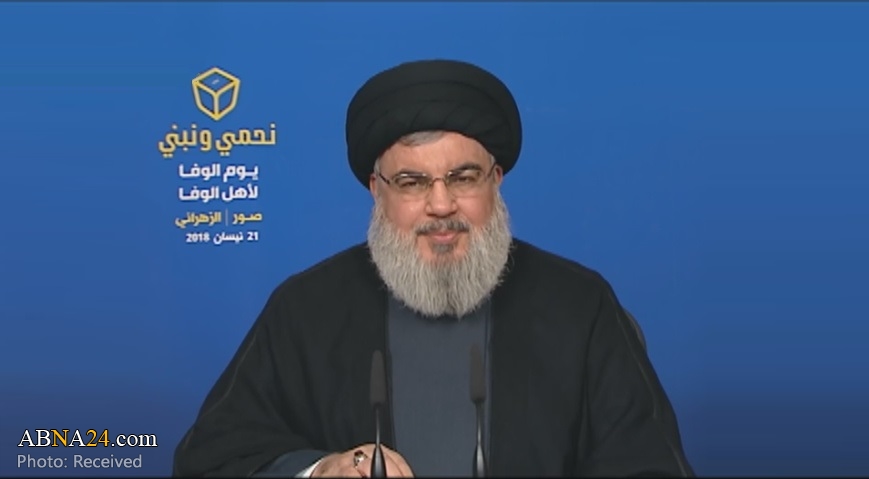 At the beginning of his speech, Sayyed Nasrallah addressed the the father of the three martyrs, Hajj Sami Muslimani, who saluted the Resistance Leader, by saying: "You, the martyrs' families, are the crown of heads."

Starting from the place of the rally, His Eminence highlighted that "the city of Tyre, remained unobstructed by sedition, as it embraced and opened its homes to Palestinians displaced in 1948."

""Israeli aggressions on Lebanon started in 1949, not with the advent of the Palestinian resistance factions," he said.

He further stated: "The city of Tyre city resisted the occupation in 1982 and on its land the first self-scarifying operations was carried to break the Zionist enemy's arrogance and prepare for the "Israeli" humiliating defeat."

In parallel, he underscored that "we meet here on the anniversary of April 1996 "Grapes of Wrath" aggression, which began on April 11, by striking Hezbollah's military headquarters in Haret Hreik."

"The "Israeli" air strike at that time failed to hit Hezbollah military Leader martyr Mustafa Badreddine as the missile hit the other room," Sayyed Nasrallah clarified.

Moreover, he recalled that the "Israeli" chief of staff in 1996 said that Hezbollah have turned ‘April understanding' into a boxing bag," noting that "the sons of Imam al-Sadr from Amal movement and Hezbollah have developed the concept of resistance, that led to victory."

Furthermore, His Eminence stressed that "the South and its people have waited the state since 1948 until Imam al-Sadr came and adopted the alternative by establishing the resistance."

He also unveiled that "before 2006, it was the Resistance that asked the state and the Lebanese Army to be present in the South and along the border."

"The Lebanese state has delayed its move and turned its back to the South," Sayyed Nasrallah mentioned, noting that "it is not the poor, who bought arms from his own money to defend the land."

Meanwhile, he added that "our crime is that we took up arms to defend our land and sovereignty."

"The resistance that was the dream of Sayyed Sharaf al-Din and Imam al-Sadr has now turned to a real force that the enemy greatly fears," His Eminence emphasized.

In addition, he went on to say that "Thanks to the resistance capabilities and achievements, South Lebanon is currently safe from the Zionist barbarism."

To Sayyed Abdl Hussein Sharf Din and Imam Moussa Sadr, Sayyed Nasrallah sent a message of assurance: "There is no humiliation today that is able to hit the land of Jabal Amel [South Lebanon]

To Imam al-Sadr, His Eminence vowed: "The resistance that you have founded owes the capability, power, technology and missiles that can strike any target in the "Israeli" enemy's entity."

"The resistance came with great sacrifices and we aren't to abandon it, as it means our dignity and pride," he added.

Addressing the people of the Resistance, Sayyed Nasrallah told the crowd: "May 6 is your day of voting. It is a message to the world that we in the South have not left the resistance and won't give up or turn our back. I hope that on May 6 ... you will choose the Hope and Loyalty [electoral lists], the hope for the future."

"Here in Zahrani-Tyre, you are not just voting for MPs, you're voting for the next Lebanese House Speaker. There is no question that House Speaker Brother Nabih Berri should be reelected as House Speaker and he is the party's strongest representation," he said.

He further hailed the fact that "since the 1920s, there has been no internal peace in the history of the South as the one it's enjoying from pride and dignity for the past 12 years."

On the internal front, Sayyed Nasrallah noted that "Lebanon has witnessed a kind of understanding: one party will defend the country and protect it while the other side will take care of the economy."

This comes as His Eminence confirmed that "we can say, ‘these are our successes.' We protected our country. Stability and security have been available since 2006."

In this context, he asked the Future Movement: "What are your achievements in administering Lebanon's economics? Those in charge failed. Everyone agrees that we have an economic problem. We're suffering from a huge debt that reached $ 80 billion.
The agriculture and the productive sectors are at an all-time low."

Commenting on the National Defense Strategy, Hezbollah Secretary General reiterated that Hezbollah is ready to discuss it after the election ends.

However, he asked the Future Movement, "Who is escaping from forming a national economic strategy?"

On this level, Sayyed Nasrallah cautioned that corruption has extended to all state institutions. "When we talk about a strong country, corruption has no place. There is no discussion, no need for debate, the steps are clear. However, if the country keeps moving like this, it will crumble."

In addition, he slammed the fact that Lebanon is suffering from sectarianism on all levels. Even Lebanese water and rivers have turned to a sectarian topic."

"Even our gas and oil blocks are going to be distributed based on sects," he feared, wondering: "what kind of country operates like that?"

He also said "This isn't a US, Arab countries or "Israeli" fault. We have to take responsibility. When you have a minister working for his sect, his town and his kids, can we still call him a minister for Lebanon?"
Source: ABNA