TEHRAN (Basirat) : A recent document has pointed to Riyadh regime’s fiendish plot to assert enormous influence on Lebanon’s May 6 legislative elections, and engineer the polls in favor of House of Saud. 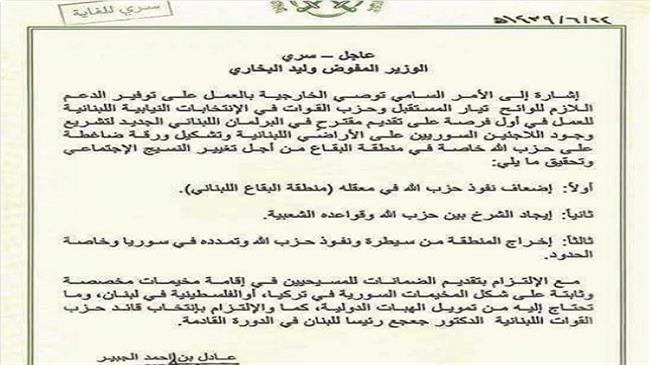 According to a report published by Lebanon-based Arabic-language al-Manar television network, which is affiliated with the Lebanese Hezbollah resistance movement, Saudi Foreign Minister Adel al-Jubeir has written a letter to the kingdom's ambassador to Lebanon Walid al-Bukhari, assigning him the mission.
The report added that Jubeir has asked Bukhari to offer his generous support to the Future Movement, led by Lebanese Prime Minister Saad Hariri, and the Lebanese Forces political party in order to draw up mechanisms aimed at keeping Syrian refugees in Lebanon, and building up pressure on Hezbollah in Beqaa Valley as part of efforts to change the demographic population of the Shia-populated region.
The Saudi foreign minister also urged the kingdom’s envoy to spare no effort in undermining Hezbollah’s popularity in various strata of the Lebanese society, and inciting people against the presence of Lebanese resistance fighters in neighboring Syria.
Jubeir further stressed the need for the establishment of camps for Lebanese Christians, similar to those set up in Turkey for Syrian refugees and Palestinian refugees in Syria, soliciting international funds for them and paving the way for Samir Geagea, the executive chairman of the Lebanese Forces, to take Lebanon’s  top office.
Addressing an election campaign ceremony via a televised speech broadcast live from the Lebanese capital city of Beirut on Tuesday evening, Hezbollah Secretary General Sayyed Hassan Nasrallah stated that eligible Lebanese voters must cast their ballots in the parliamentary elections for those who spared no effort in defending them, and not those who joined forces with Takfiri militant groups in hatching fiendish plots and conspiracies against them.