US gun victims put manufacturers in their cross hairs

TEHRAN (Basirat)- Families sue firearms producer, arguing that it should not market and sell lethal military-style weapons to civilians. 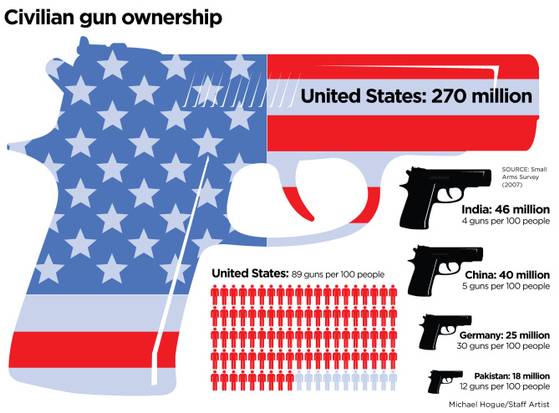 Do gun manufacturers market their products to appeal to potential mass murderers and the mentally unstable?

That's what some American families who lost their loved ones in the Sandy Hook School shooting in Newtown, Connecticut, believe - and now they are suing Bushmaster Firearms, arguing that the gunmaker should not be allowed to market and sell lethal, military-style weapons to the public.

"The manufacturer is marketing to people like Adam Lanza and they know it," Mark Barden, whose seven-year-old son Daniel was one of 26 people Lanza shot and killed at the school in 2012, told reporters before a court hearing on Monday.

In December 2012, Lanza used a Bushmaster AR-15 model semi-automatic rifle to fire more than 150 shots in under five minutes, according to court documents.

The 20-year-old who had struggled with autism and obsessive-compulsive disorder for years also shot himself.

It was Lanza’s mother, the first person he killed that day, who legally bought the weapon as well as others she kept in their home.

The lawsuit, filed by nine families, argues that the AR-15 should not be sold to civilians at all.

Lawyer Joshua Koskoff says in his brief that the rifle was designed for the military and "mass casualty assaults" to deliver "more wounds, of greater severity, in more victims, in less time".

"These aren't weapons designed to defend or to hunt. They're designed to kill," Koskoff said before the court appearance this week. "They were designed for mass murder."

An AR-15-style weapon was also used in the San Bernadino workplace shooting that left 16 people dead, including the shooters.

On Monday, Koskoff faced lawyers for the gunmaker, who are trying to get the lawsuit thrown out of Connecticut State Court. They argue that Lanza alone is responsible for the crime and their client cannot legally be held liable.

Al Jazeera has contacted Bushmaster Firearms for comment but has received no response.

The industry has been protected from lawsuits since 2005 when Congress passed a law shielding it from liability for crimes committed with its weapons.

In this case, however, the plaintiffs are relying on an exception to the law that has been used successfully against gun dealers in the past for selling a gun to someone they know shouldn't legally have one - a form of negligence.

They also cite a state law against irresponsible advertising.

Koskoff points to Bushmaster catalogues steeped in military imagery, including lines such as: "Forces of opposition, bow down. You are single-handedly outnumbered."

One Bushmaster campaign that ran prior to the Sandy Hook shooting suggested that these rifles overcome any shortcomings in one's masculinity.

The campaign was highly criticised and, according to The Boston Globe, featured "a quiz mocking the manhood of guys who can find cilantro [coriander] in the supermarket and those who fail to act on road rage".

Judge Barbara Bellis is expected to decide in two months whether or not the lawsuit can proceed.

If the trial continues, gun industry executives could be forced to testify and reveal details of their marketing strategy during the discovery process.

The families say they know that they are fighting an industry with deep pockets and experienced lawyers.

"What I'm hoping to do here is to pull that curtain back," said Bill Sherlach, whose wife Mary, a school psychologist, was killed.

"Let's take a look at what it is that you guys have been doing to foster, to stoke the fires, to fuel the rage of these militaristic, typically young males to go and do what they do."

The industry can point to the many people who collect military grade weapons and use them responsibly.

But every time the families show up in court it calls attention to the growing number who don't.