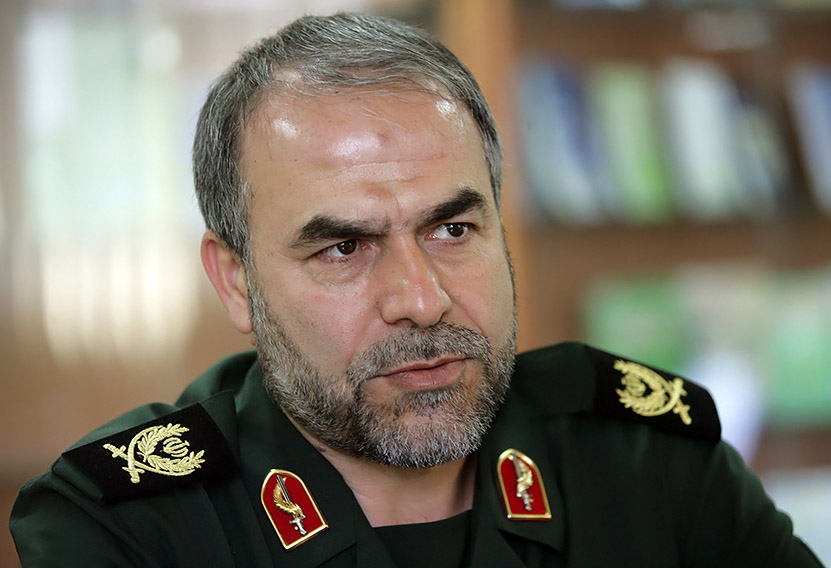 "It would be a wrong to assume that the westerners think that they can force Iran to hold missile negotiations through pressures on the Islamic Republic," General Javani said on Saturday.
He stressed Iranian officials' determination to defend the nation's defensive might and power, and said, "The westerners want to disarm the nation by negotiations on missiles but undoubtedly, this will not happen."
In relevant remarks late last month, IRGC Lieutenant Commander Brigadier General Hossein Salami brushed aside any possibility for the country to negotiate on its missile power, reiterating Tehran's intention to further strengthen its capabilities in this arena.
"Nobody can take away missile project from Iran and everybody who fears can take shelter," General Salami said in reaction to the recent remarks by US Secretary of State Mike Pompeo on Iran.
"We have reached a level of power that the US secretary of state urges Iran in its 12 demands to end its presence in the region, as this means that we cannot end Iran's presence," he added.
General Salami reiterated that US secretary of states has also said that Iran should stop development of ballistic missiles and this means they cannot and Iran itself should do it.
"Iran will not abandon its might and influence, as it is not physical clout; rather it is Islamic belief and logic that has infiltrated the region," he underlined.
General Salami said that it was unimaginable for the West to see Iran transcend borders and threaten their dominance and power in those areas.
On May 21, Pompeo gave a speech at the Heritage Foundation in Washington: "After the Deal: A New Iran Strategy." Over 26 minutes, Pompeo articulated a strategy that can best be summarized as, "Do everything we say, or we will crush you", days after the US withdrawal from the 2015 nuclear deal.
US President Donald Trump announced on May 8 that the US would no longer remain part of the Joint Comprehensive Plan of Action (JCPOA) and promised to re-impose the highest level of economic sanctions against Iran in response to Tehran's development of its nuclear program.
After Trump's declaration, the Iranian government issued a statement, calling the US withdrawal as "unlawful". The statement underlined Iran's prerequisites for continuing the deal with the five world powers after the US pullout of the agreement.
"Iran, as a country that has remained committed to its legal obligations, will pursue the US Government’s decision to withdraw from the JCPOA as provided by the mechanisms and provisions of the accord, and if the US withdrawal is not fully compensated and the full interests of the Iranian people are not met and guaranteed – as stated in the accord and as outlined by Iran’s Leader on 9 May – it will exercise its legal right to take whatever reciprocal measures it deems expedient. Other parties to the JCPOA, and especially its three European signatories, must take necessary action to safeguard the accord and to implement their commitments – which they proved incapable of fully performing even while the US was nominally a party to the deal, due to the obstructions by the Trump Administration – and to proceed from giving pledges to taking practical action without any preconditions," it said.
"None of the provisions or timeframes within the JCPOA, which were the subject of twelve years of negotiations, are negotiable in any manner. The US, which has through its meddling and erroneous policies ignited extremism, terrorism, destruction, war and child killing in our region, is in no position to issue any diktat about the Islamic Republic of Iran’s lawful presence within its own region nor its effective support for the peoples of Syria and Iraq in their endeavor to fight extremists. The US and its allies, which through their support for the regime of Saddam Hussein, including equipping it with chemical weapons and the most advanced military equipment while blocking Iran’s access to any means of defense victimized the Iranian people for eight years, and currently turning our region into a powder keg through their sale of hundreds of billions of dollars of useless advanced weaponry devouring the financial resources of the region, are in no position to impose restrictions on the Islamic Republic of Iran’s lawful means of defense, including defensive ballistic missiles which have been designed to carry conventional weapons based on the bitter experiences of the war with the regime of Saddam Hussein. Indeed, such efforts explicitly violate the principles of international law, and the Islamic Republic of Iran’s legitimate right to self-defense under Article 51 of the United Nations Charter," it added.
"As announced by the President of the Islamic Republic of Iran on 8 May, the Foreign Minister has been tasked with the duty of taking the necessary measures to obtain required guarantees from the remaining parties to the JCPOA as well as Iran’s other economic partners, and to immediately report the results of this mission. Meanwhile, the President of the Atomic Energy Organization of Iran has been tasked with taking all necessary steps in preparation for Iran to pursue industrial-scale enrichment without any restrictions, using the results of the latest research and development of Iran’s brave nuclear scientists."
"The people of Iran will with calm and confidence continue their path towards progress and development and the Government of the Islamic Republic of Iran has foreseen all necessary measures to facilitate this under any circumstances," the statement continued.
"The Islamic Republic of Iran, as a secure and powerful state, which derives its security and economic development from within, relying on the prudent participation and resilience of its brave and civilized people, seeks constructive and dignified engagement with the world, and as shown by its implementation of the JCPOA despite the United States’ continuous violations, is a trustworthy and committed partner for all who are prepared to cooperate on the basis of shared interests and mutual respect," it reiterated.