TEHRAN (Basirat): Qatari Ambassador to Tehran Ali Bin Hamad al-Sulaiti in a memo on Saturday lauded Iran for its assistance to Doha one year after diplomatic and economic sanctions against Qatar by Saudi Arabia, the UAE, Bahrain and Egypt. 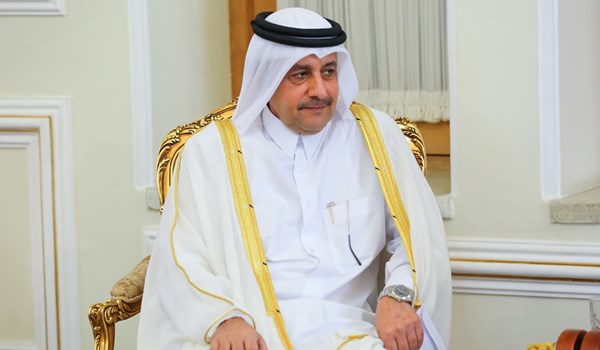 "The Islamic Republic of Iran pioneered in aid and humanitarian assistance to the Qatari government and tried to decrease the negative impacts of the siege on the Qatari citizens. It opened its airspace to the Qatari planes and rapidly sent foodstuff to make up for the abrupt cut in exports of goods by the four countries. It also provided a passage for transferring the goods by many countries to the Qatari government which was completely appreciated by the Qatari government and nation," al-Sulaiti wrote.
He stressed that one year after imposing sanctions against Doha, the Qatari government and people don’t forget the measures adopted by the four Arab states against Doha as well as the assistance of those nations which stood beside them during the crisis.
Arab quartet of Saudi Arabia, United Arab Emirates, Bahrain and Egypt abruptly announced a diplomatic and economic blockade against another regional pseudo-ally – the state of Qatar last June. The four countries accused Qatar of supporting and funding terrorism and manipulating internal affairs of its neighboring states.
Widely regarded as the most-advanced Arab state for human development by the UN, 85 per cent of the country’s population comprises expatriates, set against just 313,000 Qatari citizens in a population of 2.6 million. Qatar is also a high-income economy, with the world’s third-largest natural-gas reserves and oil reserves.
The countries cited Qatar's alleged support for terrorism as the main reason for their action, insisting that Qatar has violated a 2014 agreement with the members of the Persian Gulf Cooperation Council (PGCC). The PGCC also felt threatened by the media arm of Qatar - Al Jazeera - for engaging in what they termed as a "media conspiracy" against the nations, and also for the country’s proximity with Iran.