Right to Use Hormuz Strait for Everyone or No One

TEHRAN (Basirat): Commander of the IRGC voiced support for the Iranian president’s comments about the consequences of a US ploy to drive Iran’s crude exports down to zero, saying his force are ready to teach the enemy that either everyone is entitled to use the Strait of Hormuz or no one. 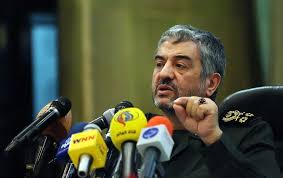 In comments on Thursday, Commander of the Islamic Revolution Guards Corps Major General Mohammad Ali Jafari expressed support for President Hassan Rouhani’s position against the US plan to exclude Iran from the Middle East oil exporters.
While the Iranian administration has taken a "revolutionary stance” in confrontation with the "crafty and criminal” US,  Iran can "make the enemy understand what it means that either everyone or no one can use the Strait of Hormuz,” the top general noted.
His comments came after President Rouhani slammed as "nonsense” the US plan for sanctions against Iranian oil exports, saying it would be impossible to let other regional producers sell oil while blocking Iran’s exports.
The US administration has announced plans to get as many countries as possible down to zero Iranian oil imports and launch a campaign of "maximum economic and diplomatic pressure” on Iran.
Last week, US President Donald Trump said in a tweet, "Just spoke to King Salman of Saudi Arabia and explained to him that, because of the turmoil and disfunction in Iran and Venezuela, I am asking that Saudi Arabia increase oil production, maybe up to 2,000,000 barrels, to make up the difference...Prices to high! He has agreed!”