TEHRAN (Basirat): Levan Dzhagaryan, the Russian ambassador to Tehran, said on Tuesday that Iran is a “valuable ally” of Russia and that Moscow attaches great importance to Tehran in its foreign policy. 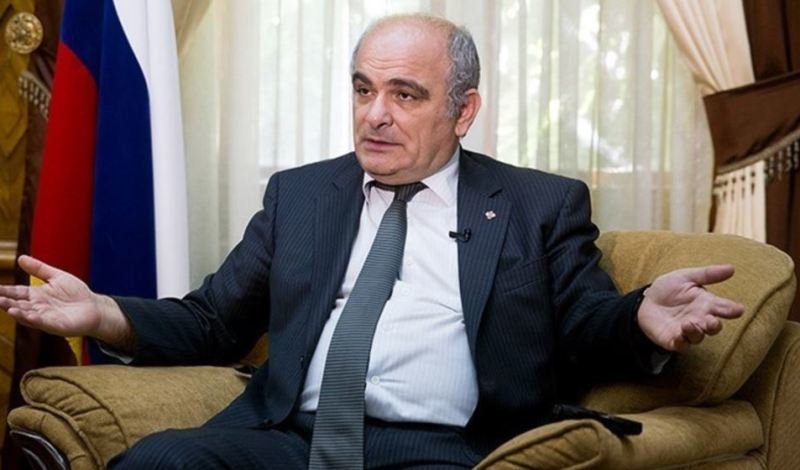 "The remarkable relations between the two countries benefit the region and the international stability and are impediment to the U.S. unilateral behavior,” Dzhagaryan said during a meeting with Hossein Amir-Abdollahian, a senior foreign policy advisor to the Iranian parliament speaker.
Ali Akbar Velayati, a veteran Iranian politician, planned to visit Moscow on Wednesday to hand over messages from Leader of the Islamic Revolution Ayatollah sayyid  Ali Khamenei and President Hassan Rouhani to Russian President Vladimir Putin. The visit took place just five days before Putin and U.S. President Donald Trump meet in Helsinki, Finland.
The visit by Velayati, who is accompanied by number of Foreign Ministry diplomats, is important at this sensitive juncture as Russia is a party to the nuclear agreement and the two countries back the Syrian government against militants.
Ambassador Dzhagaryan said that Iran-Russia cooperation in helping settle the crisis in Syria can serve as an "important model” for restoring security to the region and countering war-mongering policies.
"Fortunately, the two countries’ officials hold consultations on expanding relations and cooperation,” the ambassador remarked.
For his part, Amir-Abdollahian called Tehran-Moscow ties "friendly” and "growing”.
Commenting on the U.S. pressure on Iran, Amir-Abdollahian said that Washington seeks to exert pressure on Iran to divert the public opinion from its wrong policies and defeats in the West Asia region.
Amir-Abdollahin, who served as Iran’s point man for Arab affairs at the Foreign Ministry until June 2016, said nothing can cause a crack in the Iranians’ will to develop their country and help promote regional and international security and stability.
Trump withdrew the U.S. from the 2015 nuclear deal on May 8 and plans to re-impose sanctions on Iran.
U.S. Secretary of State Mike Pompeo announced in May that U.S. will apply economic and military pressure against Iran and will impose "the strongest sanctions in history” on the Islamic Republic.
The Trump administration is putting pressures on other countries to cut their purchases of oil from Iran by November.
Source: Tehran Times