Is establishing an Arab NATO possible?

TEHRAN(Basirat): As tensions between Iran and the United States continue to heighten under America’s hawkish President Donald Trump, latest reports have indicated that Trump's administration has been quietly pushing ahead with a plan to create a NATO-like security and political alliance between Arab countries to confront Iran. 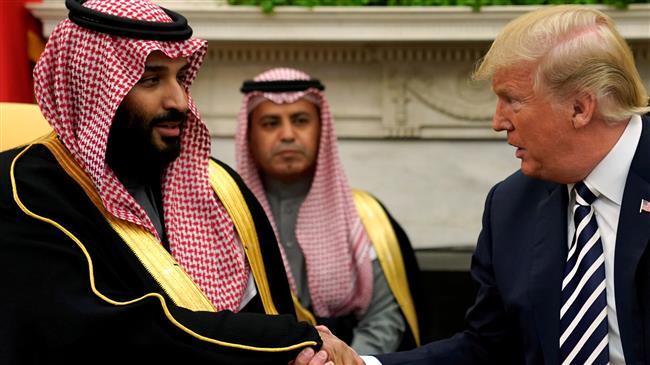 The purported security and military alliance is reportedly supposed to include six Persian Gulf Arab states, Egypt and Jordan, with its main goal being to counter what they call Iran’s expanding regional influence.
Political experts, however, have cast serious doubt on feasibility of Washington’s plans in this regard, noting among other things that the United States is actually trying to "milk” the aforesaid countries by making them buy increasing amounts of American-made weapons in the hope of warding off the spurious "Iran threat.”
Analysts believe that there are many reasons for the American support of an Arab military union styled on a Western alliance like NATO.Arab NATO is a goldmine for American arms exporters and military-industrial complex as NATO-styled, binding treaties would only increase the flow of American weapons across the lucrative Middle East market and elsewhere.
In that respect, Trump has squeezed hundreds of billions of dollars out of Arab monarchs for weapons they neither need, nor possess the expertise to use. By inking an arms deal worth over USD 110 billion, Trump has invariably expanded the longstanding military ties between Riyadh and Washington even further.
In addition to that, Riyadh will make USD 250 billion of commercial investments in the US, providing the Trump administration with thousands of badly needed new jobs. The monarchy will also be buying passenger aircraft and investing in US infrastructure projects.
Of course, the real prize is in the biggest weapon sale in history, which has the potential to bring in USD 380 billion for the US over the course of a decade.
According to the White House, the Americans have been tasked with ‘modernizing' the Saudi armed forces, as well as helping Riyadh develop its own smart weapons.
"This package demonstrates, in the clearest terms possible, the United States' commitment to our partnership with Saudi Arabia and our [Persian] Gulf partners, while also expanding opportunities for American companies in the region," a White House said in a recent statement.

Informed sources say Washington has been quietly pushing ahead with a plan to create a NATO-like security and political alliance between Arab countries to confront Iran.
Reasons Why Arab NATO is Doomed to Failure
An Arab NATO has been aimed at confronting what they call the growing Iran influence in the region. Observers say the entire project is doomed to fail due to various reasons.
Darko Lazar, a political analyst on Lebanese Alahed news websiterecently wrote that similar initiatives by previous US administrations to develop a more formal alliance with monarchies of Arab allies have failed in the past.
"As such, an Arab NATO is a US/Saudi project with clearly defined roles: Riyadh pays, Washington provides the arms, Cairo provides the bulk of the manpower, and the ‘Israelis' pitch in largely in the field of intelligence,” the analyst said
Some strategic differences between Arab monarchies have led most analysts to conclude that uniting Arab militaries under one umbrella remains unlikely.
Such an outlook seriously jeopardizes Washington's efforts with the Saudis at the helm. The Saudis cannot operate independently. Their newest military jets are piloted by Pakistani and Egyptian pilots, while other foreign nationals are already dying in droves to defend the kingdom's southern border.
Perhaps the biggest hurdles to the establishment of an Arab NATO lay in the widening cracks within the supposedly monolithic [Persian] Gulf Cooperation Council (GCC).
In late May, Saudi Arabia, the United Arab Emirates and Bahrain blocked websites belonging to fellow GCC member Qatar -- including Al-Jazeera -- over statements posted on a state-run news agency. Doha quickly claimed its official websites were hacked after statements critical of Trump and praising Iran, were attributed to the Qatari Emir.
In June 2017, Saudi Arabia, the United Arab Emirates, Bahrain, and Egypt severed diplomatic relations with Qatar in a scheme generally believed to have been orchestrated by Riyadh.
Doha has own geopolitical ambitions, which can hardly be considered compatible with those of Saudi Arabia. Observers said the move was because, unlike other Arab countries in the Persian Gulf, Qatar retained a foreign policy partially independent of Saudi Arabia.
Meanwhile, Saudi Arabia's war on Yemen is facing its own set of challenges. Besides the obvious military failures, the Saudis and the Emiratis each have dramatically different views on the way forward.
Smoke billows following an airstrike by Saudi targeting the al-Dailami air base, in the Yemeni capital Sana'a, on April 5, 2018. (Photo by AFP)
The UAE supports the creation of an independent South Yemen and opposes wide-scale military operations against Yemen's Houthi Ansarullah fighters strongholds in the north.
No less important are the disagreements between Riyadh and Abu Dhabi when it comes to Libya, where the Emiratis have teamed up with the Egyptians to back General Khalifa Haftar and the Libyan National Army in the east.
Emile Hokayem, a senior fellow at the International Institute for Strategic Studies, says instead of building deeper relationships and coalitions, the Arab states of the Persian Gulf have resorted to a constantly shifting mosaic of alliances, which often have led to contradictory partnerships.

All in all, even if the Arab monarchs of the GCC can agree on an effective strategy, the move is viewed more as a tactic by Washington to cajole Riyadh and Abu Dhabi into buying more weapons, which may boost their public image but will never serve as a bulwark for the collective security of the freely navigable Persian Gulf.
Source: Press TV