TEHRAN (Basirat): Iranian and Russian Presidents Hassan Rouhani anVladimir Putin in a meeting in Kazakhstan on Sunday conferred on ways to strengthen bilateral relations and cooperation on regional and international scenes. 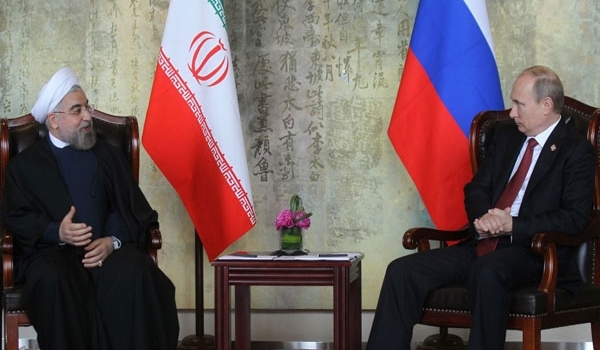 During the meeting held on the sidelines of a summit participated by presidents of five Caspian Sea littoral states in Kazakhstan, Rouhani described cooperation between Tehran and Moscow in the Caspian Sea as beneficial to both nations.
"We should try to turn the Caspian Sea into the sea of peace and friendship and an element to further cement relations, cooperation and friendship," he added.
"Mutual and multilateral cooperation of Iran and Russia in different regional and international matters, including regional security and campaign against terrorism and the ISIL in Syria, have had positive regional effects and this cooperation should continue until a full eradication of terrorism,” President Rouhani said.
Putin, for his part, referred to the developing relations between the two countries, and said, "Moscow is ready to further develop relations and cooperation with Tehran in areas of interest to both sides."
He also described the Joint Comprehensive Plan of Action (JCPOA) an important international agreement, and emphasized the importance of efforts by all parties to keep the deal alive after US unilateral withdrawal.
In a relevant development last Friday, senior Iranian and Russian officials in a meeting in Moscow discussed and underlined broadening of mutual cooperation in fighting terrorist and extremist groups.
During the meeting in Russian capital today, Iranian Deputy Foreign Minister Gholamhossein Dehqani and his Russian counterpart Oleg Vladimirovich stressed enhancing bilateral relations in fighting terrorist groups, specially the ISIL.
Iranian Ambassador to Moscow Mehdi Sanayee was also present during the meeting.
The two sides, meantime, discussed the latest terrorism threats in the Middle East and Afghanistan through sharing their experiences in fighting the phenomenon.
Source:FNA