Tehran (Basirat) :Hezbollah Secretary General Sayyed Hasan Nasrallah said it clear on the 12 anniversary of the 2006 Divine Victory: The Lebanese “resistance today is more powerful than the Israeli army” and both US and the Zionist entity are “too weak to stage wars like those launched before.” 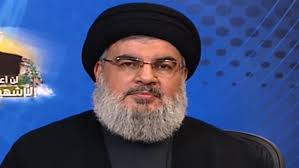 Talking during ceremony held at Ashura Square in Beirut’s southern suburb (Dahiyeh), Sayyed Nasrallah stressed that Hezbollah is "stronger than at any time since it was launched”

The resistance leader noted that the war on Syria came after US and the Zionist entity failed to topple the resistance in Lebanon in 2006. In this context, his eminence assured that the axis of resistance will emerge victorious in Syria soon.

Talking about the so-called "deal of century” which targets the Palestinian cause, Sayyed Nasrallah noted said the deal faces real problems, on top of which the retreat of the alliance led by the Saudi Arabia due to failure on several fronts.

On the Lebanese local issues, Hezbollah S.G. called for the rapid formation of the government, warning in this context that betting on regional changes by some Lebanese factions in a bid to utilize them in the Lebanese political field won’t work.

On the other hand, Sayyed Nasrallah stressed the firm alliance between Hezbollah and Amal movement, recalling the role played by Speaker Nabih Berri (Amal movement leader) in supporting the resistance during and following July War.

Meanwhile, Sayyed Nasrallah lashed out at the Saudi strikes in Yemen, addressing people of Saada’s Dahian as saying: "Those who killed you today had killed our children and women in 2006.”

His eminence saluted all those who contributed to the victory in 2006: resistance fighters, Lebanese army and security forces, steadfast people, political factions, Iran and Syria.

"Today we celebrate victory and we insist to mark this occasion, as we will also celebrate next week the first anniversary of Second Liberation in Hermel,” Sayyed Nasrallah said, referring to liberation of the Lebanese territories at the border area with Syria from Takfiri terrorists.

In this context, Hezbollah S.G. said that like the victory achieved in 2006, the "axis of resistance will emerge victorious in the war against terrorism in Syria, noting that the goals of the seven-year war in Syria are the same as July War’s goals.

"We insist to mark the occasion on August 14 in order to consolidate this victory in our culture and memory and to give hope in face of desperation which prevails (in our nation).”

"The US administration aimed through July war to wipe out resistance in order to reach Syrian and Iraqi border but it failed to reach this goal,” Sayyed Nasrallah said, pointing out that the "Lebanese steadfastness foiled the US-Israeli plan and delayed their scheme for few years.”

"Throughout the last seven years the region has been occupied with wars that have the same goals of July war in 2006,” his eminence added.

Stronger than Ever before

Since 2006, the Zionist entity has been deterred, Sayyed Nasrallah addressed crowds, noting that Tel Aviv has been trying to build up its military capabilities in view of its defeat in 2006.

"Since 2006, the Israelis have been eying resistance and they put defensive plans aimed at confronting possible attack by Hezbollah to liberate Galilee.”

Sayyed Nasrallah in his speech commented on what an Israeli officer had said that Hezbollah is the second powerful army in the region after the Israeli army.

His eminence noted that he doesn’t agree with this assessment, but he noted that "anyway it reflects the image the Israeli enemy has been drawing or Hezbollah.”

"The resistance today with its capabilities, experience, faith, will and bravery is stronger than ever before,” Sayyed Nasrallah stated.

"We are note the most powerful army in the region, but surely were are stronger than the Israeli army, for the issue is not a matter of capabilities but a matter of faith.”

Hezbollah S.G. said that the Zionist entity had repeatedly attempted to topple the Syria government.

"Israel has been a real partner in the Syrian war through its support to the militant groups in the Syrian south,” his eminence said, adding: "Israeli officials said it clear that Damascus fall serves their interests, but all these dreams have gone with the wind.”

In this context, Sayyed Nasrallah noted that the Zionist entity has been exerting pressure on Lebanon and Syria to demarcate land and maritime borders. However, he warned that "the era when Israel can impose its conditions is over.”

Sayyed Nasrallah stated that ‘Israel’ is now facing impasse in Gaza, which he said "despite being besieged and abandoned, it is firm and still offers sacrifices every day.”

‘Deal of the Century’

Sayyed Nasrallah turned then to talk about the so-called ‘deal of century’, noting that such scheme "came to light as Donald Trump and Mohammad Bin Salman took administration in US and Saudi Arabia.”

"Some in our region have been imaging the "deal of century” as an inevitable destiny, but this isn’t right,” his eminence said.

In this context, Sayyed Nasrallah said he doesn’t agree with those who say that this scheme is over, but noted that the ‘deal of century’ "faces real problems”, and that "if we set up several equations we will manage to thwart this conspiracy.”

Elaborating on the obstacles that stand in face of the ‘deal of century’, Sayyed Nasrallah said that all Palestinians refuse this project and "no Palestinian leader can bear responsibility of signing a deal that recognizes Al-Quds as capital of Zionist entity.”

Talking about more obstacles facing the deal, Sayyed Nasrallah said that the alliance led by Saudi Arabia has been retreating in the region, due to failures in Iraq, Syria and Yemen.