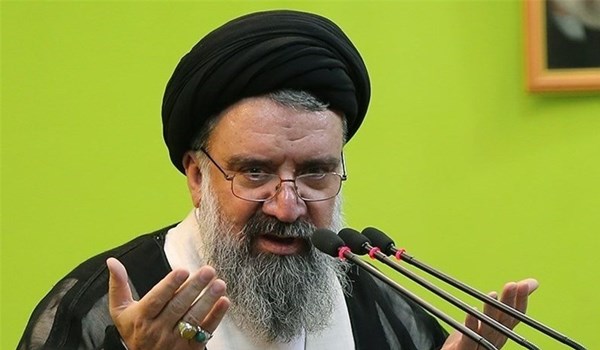 "The US, EU and all the world should know that the Islamic Republic will not withdraw even an iota from its redlines, including missile might and power," Ayatollah Khatami said, addressing a large and fervent congregation of the people in Tehran on Friday.
He also described the US administration as disloyal, dismissing talks with Washington.
Ayatollah Khatami, meantime, said that Tehran will continue negotiations with the Europeans but does not tie its economic and political issues to them.
In relevant remarks late in May, IRGC Lieutenant Commander Brigadier General Hossein Salami brushed aside any possibility for the country to negotiate on its missile power, reiterating Tehran's intention to further strengthen its capabilities in this arena.
"Nobody can take away missile project from Iran and everybody who fears can take shelter," General Salami said in reaction to the recent remarks by US Secretary of State Mike Pompeo on Iran.
"We have reached a level of power that the US secretary of state urges Iran in its 12 demands to end its presence in the region, as this means that we cannot end Iran's presence," he added.
General Salami reiterated that US secretary of state has also said that Iran should stop development of ballistic missiles and this means they cannot and Iran itself should do it.
"Iran will not abandon its might and influence, as it is not physical clout; rather it is Islamic belief and logic that has infiltrated the region," he underlined.
General Salami said that it was unimaginable for the West to see Iran transcend borders and threaten their dominance and power in those areas.
Source: FNA