Tehran (Basirat): American warlike senator McCain was buried with his wishes on Saturday. Although Trump's personality and policies are so hated that even McCain did not allow Trump to attend in his funeral, but Trump must keep eyes open on the death of this veteran politician and his co-party. 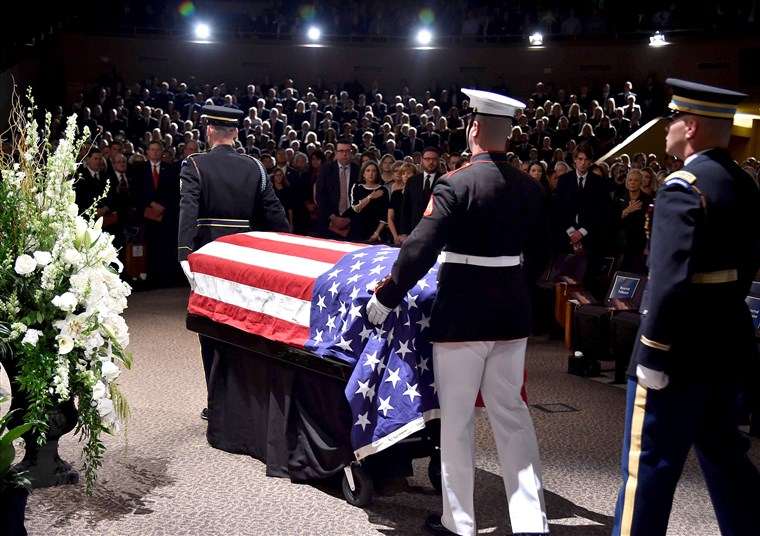 What is the message of McCain's coffin for trump and his wishes? The president of the United States, in an interview with Bloomberg, claims that Iran has been severely undermined since his presidency. In this interview at his White House office on Thursday, he said:

"When I came into here, it was a question of when would they take over the Middle East. Now it’s a question of will they survive. It’s a big difference in one and a half years.”

There are some points about Trump‘s claim that must be focused on them. First, Trump's administration faces serious and immediate challenges in domestic politics. These challenges cast a shadow on Trump‘s impeachment and dismissal. On this challenging subject, Trump and his team have threatened if the issue of Trump’s impeachment is pursued by oppositions, the collapse of US markets will occur.

The Senate and House of Representatives are currently in the hands of the majority of the Republican Party, but the probable change in the composition on the basis of upcoming election makes the Trump impeachment a real danger for the white house.

Along with these domestic issues, the foreign policy of the Trump administration faces serious problems and failures. The North Korean case has basically closed to deadlock and Trump's claims to resolve the case, is an empty threat.

Trump which is under pressure from the various parties in this turbulent situation, wants to make his policies successful and magnificent but American politicians' assessment does not show this. A top lawmaker, Bob Corker said at the start of Secretary of State Mike Pompeo’s hearing in front of the Senate Foreign Relations Committee: "The administration tells us, ‘Don’t worry, be patient, there’s a strategy here,’ but from where we sit it appears that in a ‘ready-fire-aim’ fashion the White House is waking up every morning and making it up as they go.”

Another point that should be considered about Trump's remarks is that he needs to negotiate with Iran. In fact these remarks are preparedness for invitation of negotiation. With the message that if you do not negotiate with us, you will be in danger of collapse. It is an achievement and victory for the White House to sit at the negotiating table with Iran without any conclusion and agreement. Trump administration pull out of the Iran nuclear deal (JCPOA) with the promise that Iran will sooner or later be forced to sit on negotiating table. Of course, negotiating table, in fact, is the trial that Iran should sit on the defendant's seat and acknowledge their faults, in order to compensate them, give them the necessary privileges to be pardoned.

A look at the life of Trump reveals that he is accustomed to show himself as powerful, dominant, and victorious in all circumstances. Perhaps the root of this mentality lies in his commercial and demographic experiences. The facts of diplomacy will teach the president of the United States that the international scene is not a building company and a television program.

John McCain was one of the most famous politicians in the United States who wished to overthrow the Islamic Republic of Iran. A few days ago, McCain died of brain cancer. This American warlord senator is buried with his wishes. Although Trump's personality and policies are so hated that even McCain did not allow Trump to attend in his funeral, but Trump must keep eyes open on the death of this veteran politician and his co-party.