TEHRAN (Basirat) : Iran’s Armed Forces staged countrywide military parades on Saturday to mark the Sacred Defense Week on the 38th anniversary of the onset of the Iraqi imposed war on the Islamic Republic. 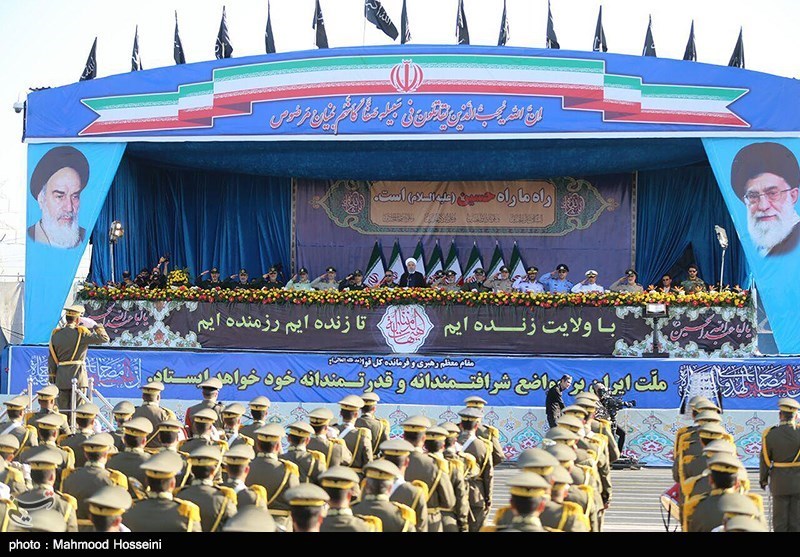 In capital Tehran, the parades were held at the mausoleum of the late founder of the Islamic Republic, Imam Khomeini, south of the city.
President Hassan Rouhani delivered a speech at the opening of the ceremony in Tehran, which was attended by senior military commanders, including Chief of Staff of the Iranian Armed Forces Major General Mohammad Hossein Baqeri.
Various units representing the Iranian Navy, Air Force, Army Ground Force, Airborne division, the Islamic Revolution Guards Corps (IRGC), and Police participated in the parades.
Simultaneously, a large-scale military parade was held in the southern port city of Bandar Abbas, involving more than 600 military vessels and submarines.
Iranian Parliament Speaker Ali Larijani delivered a speech at the military ceremony in Bandar Abbas.
The most recent achievements of the Iranian armed forces in missile industry, equipment for the ground, naval and air defense forces as well as communication gear were put on display in the military events.
In Iran, the 1980-1988 Iran-Iraq war is known as the Sacred Defense, and the Sacred Defense Week is held on the anniversary of the beginning of the war.
Source:Tasnim