TEHRAN (Basirat): Saudi whistle-blower Mujtahid, who is believed to be a member of or have a well-connected source in the royal family, revealed that after murdering prominent journalist Jamal Khashoggi in Turkey, Saudi Crown Prince Mohammed bin Salman does not allow other princes to meet his father for the fear of a coup. 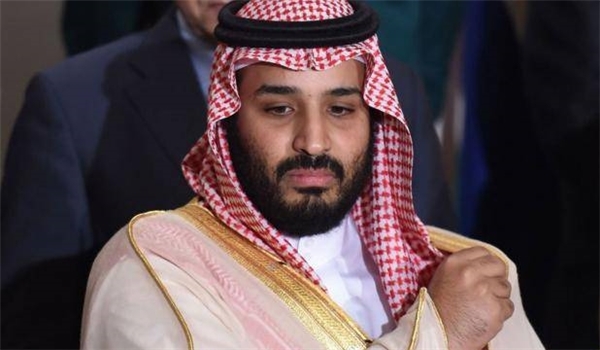 "While there are speculations about Mohammed bin Salman's overthrow (after ordering Khashoggi's killing), he prevents other princes from meeting his father (King Salman)," Mujtahid wrote on his twitter page on Friday night.
Meantime, he said, there are some other princes who are afraid of meeting King Salman since they fear that they might be detained to be used as a scapegoat in Khashoggi's case.
Bin Salman has also put some of the Saudi princes under tight security measures for the fear of a coup or being used by the foreign states to this end, Mujtahid wrote.
Khashoggi, known for his criticism of Saudi Arabia's policies, went missing on October 2 after entering the Saudi consulate in Istanbul to obtain a marriage document. Ankara has accused Riyadh of murdering the Khashoggi and smuggling his body out of the consulate in pieces. Saudi Arabia has denied the charges as "baseless", stressing that the journalist left the consulate shortly after he arrived, without providing any evidence.
After two weeks of denial by Saudi officials, Riyadh sacked a top general and arrested several people after confessing that dissident journalist Jamal Khashoggi was murdered in the Turkish city of Istanbul, but made no mention of where his body is.
Saudi Arabia said in a Friday announcement that the preliminary results of its investigation indicate Khashoggi had been killed in a "fight with people who met him in the Saudi consulate in Istanbul”.
Saudi Attorney-General Sheikh Saud al-Mojeb stated that Khashoggi died after "discussions" at the consulate devolved into an altercation.
"Discussions that took place between him and the persons who met him … at the Saudi consulate in Istanbul led to a brawl and a fist fight with the citizen, Jamal Khashoggi, which led to his death, may his soul rest in peace," the attorney-general said in a statement, adding that "the investigations are still under way and 18 Saudi nationals have been arrested".
Saudi King Salman has also ordered the formation of a ministerial committee with the Saudi crown prince as head to restructure the General Intelligence Agency.
According to Saudi state TV, the Kingdom has relieved Ahmad al-Assiri, a top general and close aide to Saudi Crown Prince Mohammad bin Salman, from his duties in the General Intelligence.
Three people with knowledge of the Riyadh plans told The New York Times on Thursday that the rulers of Saudi Arabia are considering blaming al-Assiri for the killing of Khashoggi.
Blaming al-Assiri could also provide an explanation for the apparent killing and help deflect blame from the crown prince, who American intelligence agencies are increasingly convinced was behind Khashoggi’s disappearance, according to the newspaper.
In addition to al-Assiri, Saudi Arabia also dismissed four other senior officials, including Saud al-Qahtani, a top adviser to the royal court.
Shortly after news of his arrest, users on Twitter found and reposted a 2017 tweet by al-Qahtani, in which he said, "You think I'm acting on my own? I'm just an employee and a faithful servant to my King and his royal highness the crown prince".
It remains unclear where Khashoggi's body is following his killing.