Without the defenders of the shrine, enemies would have come close to Imam Hussain's tomb

Tehran (Basirat) :The following are statements made by the supreme leader of the Islamic Revolution during a meeting with some families of the martyred defenders of the holy shrines on October 22, 2018 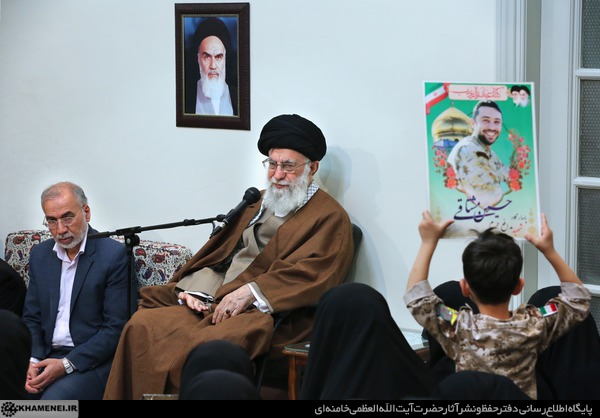 In the Name of God, the Most Beneficent, the Most Merciful,

Welcome dear brothers and sisters, respected families of our dear martyrs. The sacrifice made by your martyrs—who were martyred outside Iran at this epoch of time— resembles the sacrifice made by those who protected the grave of Imam Hussain (a.s.), giving their lives for it.
There was a time when the Abbasid caliphs had decided to destroy the sacred tombs of Imam Hussain (a.s.), and probably other sacred tombs as well. Some people prevent them and protected the grave, sacrificing their lives. They said if anyone comes to visit the grave, their arms will be cut off, legs will be cut off, and they will be killed. Nonetheless, they went. The same impetus has transformed today to the march of 20 million pilgrims on foot on Arba'een. If some people had not made a self-sacrifice then, the greatness and splendor of Imam Hussain (a.s.) would not have conquered the world today.
You see people from different countries, and populations, Persian, Turk, Urdu, European, even from the United States go there. Who made this possible? The first blocks were laid by those who gave their lives to visit the tomb of Imam Hussain (a.s.). Your children did the same. If it was not for your dear friends, your dear martyrs, those who went there and endeavored for the sake of God, the enemy would have advanced up to a few kilometres of Karbala, and close to the holy tomb of Imam Hussain (a.s.). They were pounding Karbala with short range mortars, 60 calibre mortars. They would have come that close. They were near Al Kazimayn, near Zeinabiyah, on which they had actually laid siege. Your youth went among thousands of others and counteracted the major plight that had befallen upon Islam and Muslims. This is the great work your youth did. And it has been for God. We didn't persuade anyone to go. It was not like the time of the US-backed Saddam war when we encouraged young men and Imam Khomeini made a command, and military songs were sung before military operations. It wasn't like that. Nonetheless, these youths went with such enthusiasm, begging for permission to go. This is self-sacrifice. This is a blessing by God Almighty.
God willing, you will see in the near future the effects of this blessing on the Muslim world. Of course, it is hard for you, fathers, mothers, spouses, children, brothers, and sisters. It is obviously very difficult. However, in return for the hardship, there is the blessing of God Almighty. His promise to those who are patient is that God Almighty blesses those who are patient during times of hardships. This is God's promise. It is in the Qur'an. God willing, you will be treated the same way. God willing, we join your youth, follow them on the same path, and reach the same destiny. Alright, please recite another salawat (peace be upon the prophet and his household).