Tehran (Basirat):Iran has criticized Oman for hosting the Israeli premier, saying that Muslim states shouldn’t give the usurper Zionist regime room for maneuvering to create new predicaments and problems in the region. 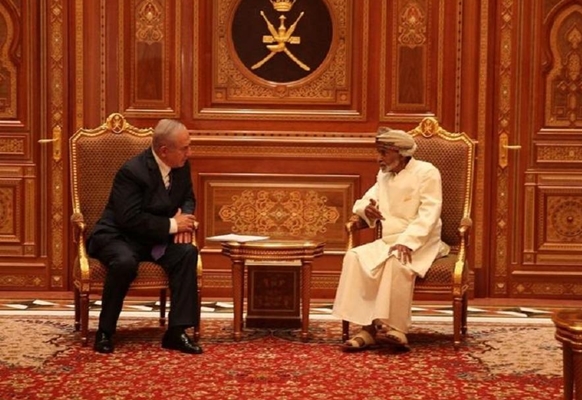 The criticism was raised by Foreign Ministry Spokesman Bahram Qassemi in response to a question by reporters regarding a recent visit to Oman by Israeli Prime Minister Benjamin Netanyahu.
"Indubitably, the Zionist regime [of Israel] seeks to sow discord among Muslim countries and cover up 70 years of usurpation and aggression and killing of innocent Palestinian people,” said the spokesman.
"In our point of view, Islamic countries in the region should not, under White House pressure, give the usurper Zionist regime [of Israel] room for maneuvering to create new predicaments and problems in the region,” the spokesman added.
"It seems that since the beginning of the presidency of Mr Trump, the Zionist lobby groups at the White House and within the US government have been more active than ever before in order to serve the illegitimate interests of the Zionist regime and put pressure on Islamic countries to normalize their relations with the usurpers of Muslims’ first Qibla (al-Quds),” Qassemi added.
"History shows that submission and capitulating to the illegitimate demands of the United States and the usurper Zionist regime will further embolden them to exert more pressure, advance further into the region and ignore the inalienable and legitimate rights of the Palestinian nation,” the spokesman noted.
Netanyahu along with a delegation, including Yossi Cohen, the director of the Mossad spy agency, and National Security Adviser Meir Ben-Shabbat, arrived in Oman’s capital, Muscat, on Thursday night and flew back to the occupied Palestinian territories later on Friday, making it the first such meeting in over 20 years.
A joint statement by Netanyahu and Oman’s ruler Sultan Qaboos said the two sides "discussed ways to advance” the so-called Middle East peace process and "a number of issues of mutual interest to achieve peace and stability in the Middle East.”
Muscat and Tel Aviv have no diplomatic relations, and the last Israeli leader to visit Oman was then-prime minister Shimon Peres in 1996.
Earlier this week, Palestinian President Mahmoud Abbas also visited the Persian Gulf Arab state for three days.