TEHRAN(Basirat: Ayatollah Khamenei: I would like to thank the people of Iraq for their hospitality and kindness as they succeeded in managing that crowd in the course of a few days. This event is an extraordinarily important event 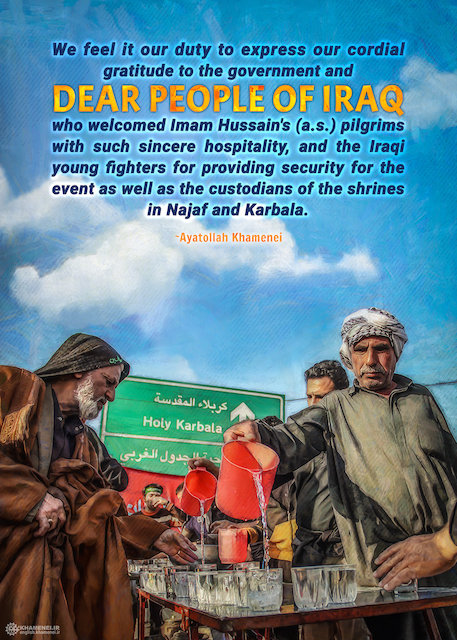 I deem it necessary to thank the government, people and different tribes of Iraq who made sacrifices, rendered services and showed greatness of character in this very important test. This year's Arbaeen of Karbala was an astonishing event. The enemies of Islam and Ahlul Bayt vainly thought that they had blocked the path of Muslims. Notice what a great movement was launched. When even bodies stay together, it has such a reflection. If we stay together, if Islamic governments and Muslim nations - whether Shia or Sunni or different denominations of Shia and Sunni - are honest with one another, if they are not suspicious of one another, if they do not insult and have malevolent intentions against one another, notice what will happen in the world and what great dignity will be brought about for Islam. Unity, unity!

I would like to thank the people of Iraq for their hospitality and kindness as they succeeded in managing that crowd in the course of a few days. This event is an extraordinarily important event.

I would like to, in addition to praying for this move to be accepted by God, express my gratitude to all those who participated in the walk this year. We offer our heartiest gratitude to the government of Iraq who prepared the facilities for this magnificent movement, the beloved Iraqi nation who hosted and welcomed the pilgrims of Aba Abdillah Al-Hussain (as) with such sincerity and willingness, the Iraqi youth, the Hashd al-Sha'bi (Popular Mobilization Forces), and the providers of security for the event as well as the officials at the pilgrimage sites of Najaf al-Ashraf and Karbala. We ask God to grant them with His divine blessings so that they can proceed with their efforts in the best possible manner.