Russia should let Israel attack Iranians in Syria: US envoy 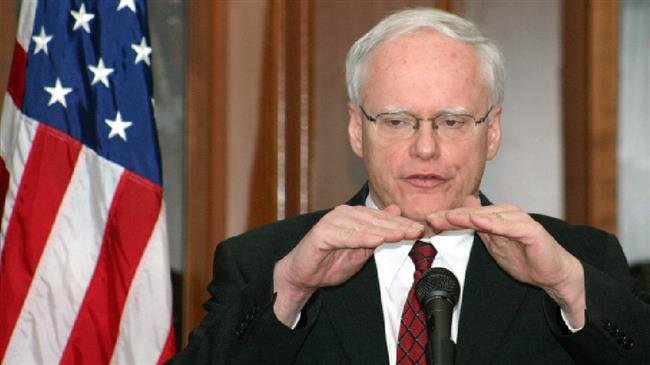 "Russia has been permissive, in consultation with the Israelis, about Israeli strikes against Iranian targets inside Syria. We certainly hope that that permissive approach will continue,” James Jeffrey, Washington’s special representative to Syria said in a conference call with reporters on Wednesday.

Both Iran and Russia have been supporting Syrian President Bashar al-Assad’s government purge foreign-backed terrorist groups from the country.

Israel, however, views the Islamic republic’s advisors in Syria as a threat and has openly pledged to target them out until they leave the country.

The Israeli air force has staged repeated air raids against Syrian military bases that it claims are used by Iranian military advisors.

In October, Moscow equipped Damascus with the advanced S-300 surface-to-air missiles, days after Israeli fighter jets attacking Syrian targets used a Russian surveillance plane flying nearby as a shield and misled the Syrian air defenses to shoot it down.

The incident in September strained ties between Russia and Israel. According to some reports, Moscow has repeatedly turned down requests by Israeli Prime Minister Benjamin Netanyahu for a meeting with Russian President Vladimir Putin.

"Our immediate effort is to try to calm that situation down and then move on to a long-term solution,” the US envoy said with regards to the fallout between Moscow and Tel Aviv.

The diplomat said Washington was working to ensure that all Iranian military advisors leave Syria.

"The Russians, having been there before, would not in fact withdraw, but you’ve got four other outside military forces - the Israelis, the Turkish, the Iranian and the American - all operating inside Syria right now. It’s a dangerous situation,” Jeffrey said.

Iran has made it clear that it would stay in Syria as long as Damascus requests.

Jefferey noted that forcing Iran to leave Syria was an objective of Trump’s campaign of economic pressure against the Islamic Republic, which seeks to end Tehran’s ballistic missile and nuclear energy programs while forcing it to roll back its regional influence.