TEHRAN (Basirat) : The political leader of the Hamas resistance movement said the Israeli minister of military affairs’ resignation in the aftermath of an Egypt-brokered truce with Gaza constitutes “an admission of defeat” and a “political victory” for the Palestinian resistance in the besieged territory. 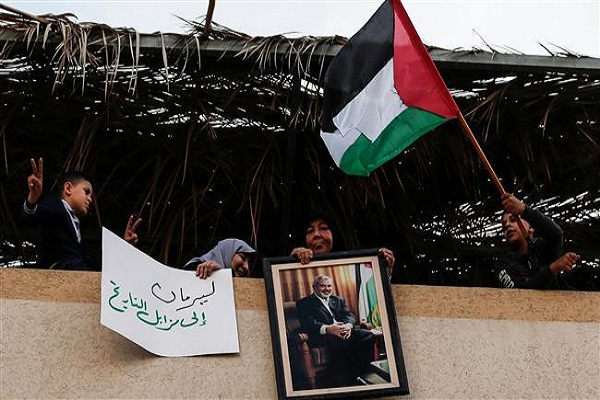 Head of Hamas Political Bureau Ismail Haniyeh made the remarks on Wednesday hours after Avigdor Lieberman stepped down from his post in protest at Tel Aviv’s ceasefire with Gaza-based resistance factions only days after the regime sparked the worst flare-up of violence in the coastal enclave since its 2014 war there.


"We achieved a political victory with the resignation,” Haniyeh told Lebanon’s al-Mayadeen TV channel. "Lieberman’s resignation announcement is an admission of defeat for him and the usurping entity.”

The resignation followed an Israeli commando raid and a spate of deadly airstrikes against Gaza, which triggered retaliatory rocket attacks by Palestinian resistance groups into the southern parts of the occupied territories.

Lieberman cited "differences” with Israeli Prime Minister Binyamin Netanyahu – who had backed the truce -- as the reason for his departure.
He described the truce as "a capitulation to terror” and pulled his political party out of the coalition administration in Tel Aviv, a move that left Netanyahu with a single-seat parliamentary majority and could bring about early elections in the occupied lands.
Netanyahu, however, tried to defend his decision to accept the truce and said, "In times of emergency, when making decisions crucial to security, the public can’t always be privy to the considerations that must be hidden from the enemy.”
Haniyeh further stressed that Hamas had "achieved a military victory against this odious occupier in less than a week.”
"A military victory occurred with the heroic performance of the Palestinian resistance factions who responded to the occupier’s crime and aggression with a response commensurate with its aggression,” he added, according to Press TV.
The Hamas leader further noted that resistance is "the path to Jerusalem [al-Quds] and all of Palestine’s land.”
Additionally on Wednesday, Abu Hamzeh, a spokesman for Hamas’s military wing the Ezzeddin al-Qassam Brigades, said the Palestinian resistance factions had managed to lead Israeli politicians and military officials to "lose their future.”
Lieberman’s resignation, he added, should serve as a "lesson to those who wish to test the Palestinian resistance."' Political confusion in Israel exposed’
The Islamic Jihad, the second-largest Palestinian resistance group based in Gaza, also echoed Haniyeh’s remarks.
"Behold the political slaughter dealt to leaders of the occupation who aren’t capable of dealing with Gaza,” it said in a statement. "The resistance succeeded not only in deterring the enemy militarily, but also sowed confusion in their political considerations.”
Separately on Wednesday, the Lebanese Hezbollah resistance movement congratulated the Palestinian people and resistance factions on their latest victory over the Zionist enemy in Gaza.
It said a statement that the triumph was the fruit of the Palestinians’ steadfastness and the unity of resistance movements.
The victory proved that the Palestinians can confront any Zionist aggression and frustrate all the conspiracies, the statement read.