Iraqi president in Iran to boost ties amid US sanctions

Tehran (Basirat) :Iraq’s President Barham Salih has arrived in Tehran for a two-day visit during which he is expected to discuss issues of mutual interest as well as important regional issues with Iranian officials. 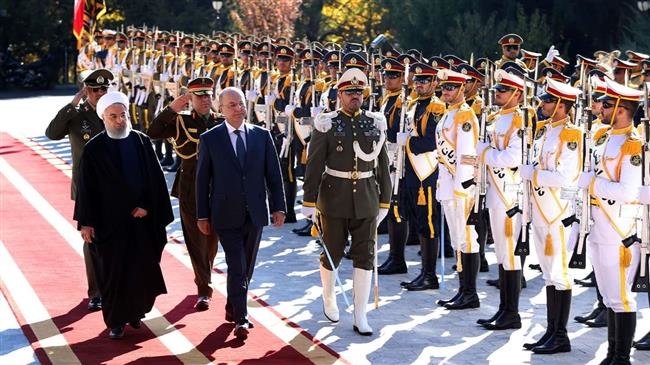 Salih’s plane touched down in the Iranian capital on Saturday, and he was received by Minister of Industry, Mines, and Trade Reza Rahmani.
An official reception ceremony was later held for the Iraqi president by his Iranian counterpart Hassan Rouhani.
This is Salih’s fourth regional trip and the first one to Iran since taking office on October 2. He has so far visited Kuwait, the United Arab Emirates, and Jordan in his capacity as president.
Tehran and Baghdad have shared a unique alliance since the end of the reign of the former Iraqi dictator Saddam Hussein in 2003.
The alliance has featured joint regional counter-terrorism efforts, including intelligence sharing and presence of Iranian military advisors on Iraq's soil in support of the Arab country’s operations against terrorist outfits.
Iraq heavily depends on imports of natural gas from Iran to produce electricity.
Most recently, Iraq rejected a US deadline to stop importing natural gas from Iran, warning that any halt to the supplies would create a real power crisis. The port of Basra in southern Iraq was hit by violent protests, which spread to other cities this summer, partly because of a halt of imports of electricity from Iran.
Iraq has rejected a US deadline to stop importing Iranian gas, warning that any halt to the supplies would create a real power crisis.
Earlier in the year, Baghdad also successfully requested and earned a waiver from Washington’s sanctions targeting Iran’s oil imports.
The country has opposed US sanctions against Iran, which Washington launched against the country after unilaterally leaving a multi-lateral nuclear agreement that it had signed with Tehran together with Britain, France, Russia, China and Germany back in 2015.
Source:PressTv