TEHRAN(Basirat): In his latest remarks in response to the U.S. President Donald Trump, Emanuel Macron, French President, has claimed that Paris is the U.S. ally and not a vassal state! Beyond that, Macron has stated that Trump's anti-French tweets have not hurt his feelings, and he has no intention of responding to these controversial tweets. 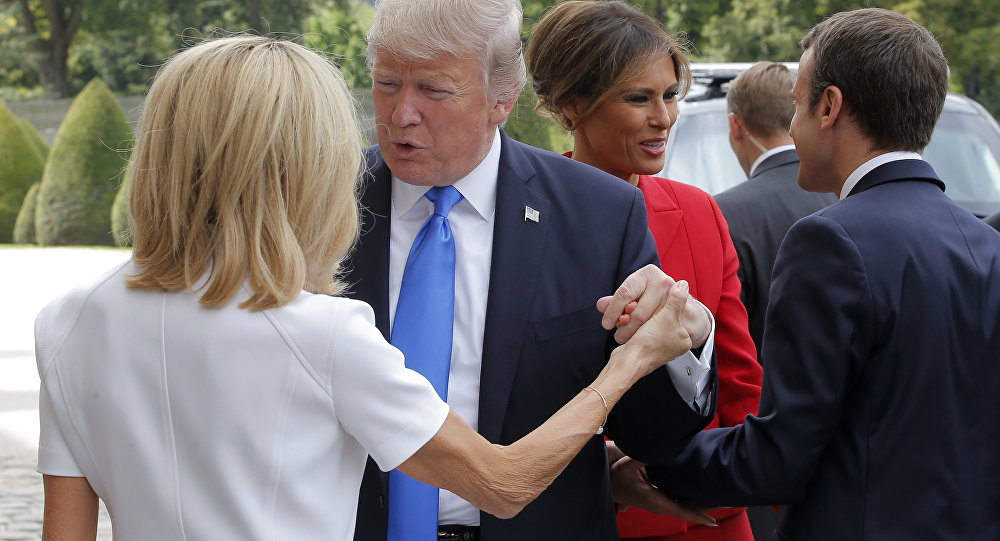 The French president's remarks came after U.S. President attacked Macron and France over its near defeat to Germany in two world wars and Macron's approval ratings. Trump posted these tweets after his visit to France for the centenary of the end of World War I, during which Macron pushed his proposals for an EU army and said France has to protect itself with "respect to China, Russia, and even the United States".

"(Paris) suggests building its own army to protect Europe against the U.S., China, and Russia. But it was Germany in World Wars One & Two - How did that work out for France? They were starting to learn German in Paris before the U.S. came along. Pay for NATO or not!" reads Trump's tweet.

But Macron's response to Trump's tweets wasn't that severe; "I don't think the French expect me to respond to tweets, I think he's playing politics, and I let him play politics"!

He also added; "At every moment of our history, we were allies, so between allies, respect is due… But being an ally doesn't mean being a vassal state".

There are some points regarding Macron's remarks that should be taken into consideration:

Firstly, Macron's answer to the anti-French statements of the President of the United States was the softest possible response. In other words, the French's humiliation by Trump didn't encounter a solid response from the Elysee Palace. Undoubtedly, this will make Trump more insolent in the future. Macron's silence against Trump raised lots of criticism among French citizens. The French demanded the Elysee Palace to take a serious stance against Trump's humiliations.

The next point here is that unlike Macron's claim, France is exactly a vassal state and not an ally to the United States! It's well remembered that in 2017, when Trump announced his four conditions for remaining in the nuclear deal with Iran, the French authorities, despite being aware of the illegality of the White House's action, decided to cooperate with the United States.

Subsequently, the French played an important role in encouraging German officials to change the Joint Comprehensive Plan of Action. The French continued to play on the US ground even after Trump withdraws from the JCPOA. The French, commanded by Mike Pompeo, the secretary of state of the Trump government, repeatedly questioned Iran's missile and defensive capability as an essential requirement for cooperation with Iran, and, secretly and openly, insisted on this appeal.

As we can see, Emanuel Macron and other European authorities have practically compromised with Trump, instead of resisting his irrational demands. In other words, Macron has accelerated the project of the humiliation of the French nation by the United States. Undoubtedly, Macron's recent position against Trump will be met with intense reactions inside France.

Existing documents indicate that French politicians have turned into the U.S. "vassal state", contrary to the claims of their inexperienced President. Of course, this is not just about Emanuel Macron's presidency. Even during the presidency of Nicolas Sarkozy and François Hollande, we saw the direct play of the Elysees Palace on the White House ground, and the decline of France international credibility, a trend which seems to be continued and even intensified in the future.