IRGC General: US Aircraft Carriers Nothing but Scrap Iron

TEHRAN (Basirat) : The lieutenant commander of the Islamic Revolution Guards Corps (IRGC) highlighted the vulnerability of the US aircraft carriers to Iran’s ballistic missiles, saying American commanders themselves admit that such warships are scrap iron. 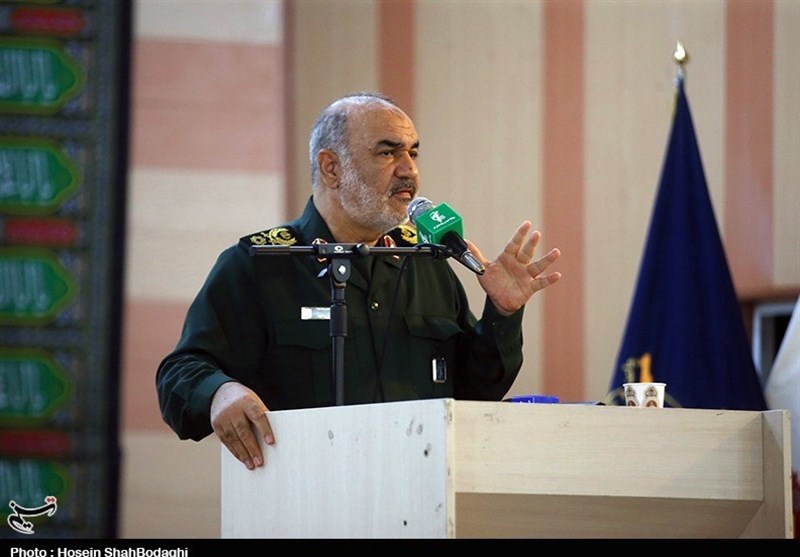 Addressing an academic gathering in Tehran, Brigadier General Hossein Salami said Iran’s acquisition of ballistic missiles put an end to the freedom of US aircraft carriers moves in the region and forced the Americans to withdraw.
The Islamic Revolution terminated the US political power and dominance over the region in a way that American commanders announced a couple of years ago that US aircraft carriers are nothing but scrap iron and ammunition depot that need to be saved, he added.
The IRGC general also said that the Islamic Republic has inspired other powers to stand against the US and oppose its policies.
General Salami then pointed to the defeat of Daesh (ISIL) terrorist group, saying the US spent more than $7 trillion to form the notorious group to harm the axis of anti-Israeli resistance movement but the colossal popular power in Syria, Iraq and Yemen thwarted the plot and petrified the Zionist regime of Israel.
The commander also dismissed the idea of negotiations with the US, saying Americans always have excessive demands and aim for war and invasion after negotiations and compromise.
In comments in 2017, Leader of the Islamic Revolution Ayatollah Seyed Ali Khamenei had also rejected the idea of negotiations on Iran’s defense power, stressing that the country will press ahead with the plans to boost its might and build up its defense capabilities.
"As we have announced several times in the past and announce it once again, the country’s defense capabilities and power are not subject to negotiations and bargaining,” Ayatollah Khamenei said at the time.
"We will have no bargaining and dealing with the enemy over the country’s means of defense and over whatever provides or supports the national power,” the Leader underscored.