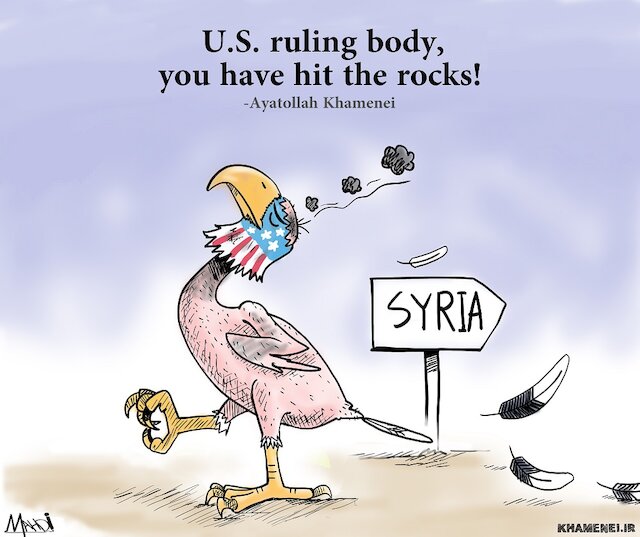 The US has been defeated in the region. Despite all those efforts, chasing of temptations, and his claims, the US – the Great Satan – has not managed to achieve his goals in the region.They have spent so much money and to no avail: "And so will they continue to spend, but in the end, they will have only regrets and sighs. Eventually, they will be overcome," [The Holy Quran, 8: 36]--this is a Quranic ayah. They have spent tons of money, but they have not reaped a single benefit. From now on, too, no matter how much the satanic powers spend in the region, the result will be the same.

I, unequivocally, declare the President of the United States, the French President [Emmanuel Macron], and the Prime Minister of Britain [Theresa May] as criminals; they have committed a crime. Of course, they will benefit from none of these attacks; just as it was while in Iraq, Syria, and Afghanistan, where they were present over the past years committing the same criminal acts; they gained no advantage.

Just a few days ago, the U.S. President announced that they’ve spent seven trillion USD in Western Asia—or the "Middle-East" as he called it—and they [U.S.] made no profit. He is right: they didn’t gain a thing. The U.S. must know, from now on, too, no matter how much they spend or how much they endeavor, they will certainly gain nothing from this region!

Today, the US is clearly weaker in the region than 10, 20 years ago. Today, the vicious Zionist regime is clearly weaker than the past[...] Today, the people and country of Iran are a strong tree. To hell that America and the Zionist regime threaten Iran! Their threats, their moves and their malevolence have been defeated today. And they will be defeated from now on too. Sanctions will fail and so will their policies, thanks to resistance.

Nov 25, 2018
On the issue of the Resistance, the United States’ officials decided to uproot the Resistance in West Asia; and they were confident that they would accomplish this task. We are standing firm, and we have said that we would not allow them to accomplish their goals. Today, it has been proven to every human on earth that they wanted to uproot the resistance in West Asia, but that they failed; and when we intended to accomplish our goals, and we’ve succeeded. Everyone in the world has understood this. Injustice should be confronted.

Feb 8, 2018
You excellences who rule over the US, this time you hit your head against a brick wall; and you may wish to repeat your actions; but, you should realize that you will hit your head against that brick wall again. Secondly, you brought damage upon Iran, in recent days, and you might try to cause some damage in the future; however, you should know that your actions will not be left without a response.

Thirdly, the individual who is in charge of that country [USA] should realize, despite the fact that he is an unstable man [Audience Laughs]--presently, they are speaking about his psychotic episodes and the fact that he needs psychiatric treatment--and the officials of the US government, and those around them, should know that these psychotic outbursts will gain a response.