A Palestinian government will be formed in Tel Aviv: Imam Khamenei 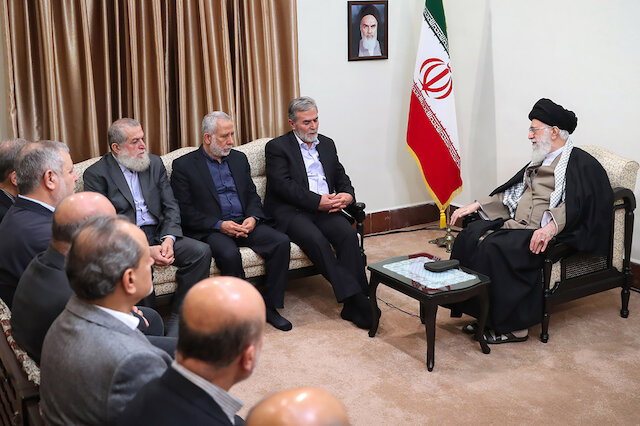 In this meeting Ayatollah Khamenei stressed that the freedom of Palestine will certainly happen, asserting that: Palestine will strongly persist, and by the grace of God, the Palestinian nation's ultimate victory will come true in the near future.
Addressing the head of the Islamic Jihad of Palestine, Ayatollah Khamenei mentioned a clear equation regarding Palestine and said: according to this equation, your resistance will result in your victory, and if you do not resist you will not be victorious. But thank God, the people of Palestine have resisted until now in the fight against the Zionist regime, and have been victorious.

The Leader of the Islamic Revolution added: As for the recent years, the victory of the Palestinian people has not meant being able to establish a government in Tel Aviv;— of course that will come true by God's help. However, the main victory has been the fact that the Zionist regime— which Arab armies failed to defeat— was brought to its knees by the Palestinian people and the resistance; and by God's will, you will achieve greater victories.
Ayatollah Khamenei reminded the victories of Palestinian resistance groups in their defense against the Zionist regime and said: During the two last wars against the Resistance groups, the Zionist regime begged for ceasefire after 22 days in one case and after 8 days in another instance; in the most recent conflict, the Zionist regime asked for ceasefire after only 48 hours. This means the Zionist Regime has been brought to its knees.

Ayatollah Khamenei regarded these events as very important, and as divine blessings, reiterating: The reason for the Palestinians’ consecutive victories in recent years lies in resistance. Thus, in the future, as far as the resistance exists, the decline of the Zionist Regime will continue.

Referring to the extreme pressures put on the Islamic Republic of Iran by the Front of Arrogance, Ayatollah Khamenei stated: These pressures can never make us give up our divine, religious and logical duty in supporting Palestine.
Further on in his speech, the leader of the Islamic Revolution praised resistance and fighting of the Palestinian Islamic Jihad and asked God the Exalted to bestow a speedy recovery upon Dr. Ramadan Abdullah, the former secretary general of the Islamic Jihad.
During this meeting, Mr. Ziad Al Nakhala—the Secretary-General of the Islamic Jihad Movement in Palestine—reported on the latest developments in the occupied Palestine and on great potentials and preparations of the resistance groups, saying: Despite all the pressures, the people of Gaza are standing up to the Zionist Regime and the so-called Deal of the Century plot, a salient example of which is continuing the weekly protests of ‘Friday of Return’.

He also pointed out to the recent victory of the Islamic resistance in Palestine against the Zionist regime and this regime's request for a ceasefire after 48 hours and added: Today, the abilities and power of the Islamic resistance in Palestine is stronger than ever, hence if war breaks out, Tel Aviv and all other cities and settlements of the Zionist regime will be within the reach of thousands of missiles of the Resistance.
Tags: basirat ، imam sayyid ali khamenei ، Jihad of Palestine
Error Report
0