Tehran (Basirat ): A business forum between the Iranian side and representatives from Iraq’s central and southern provinces was held Wed. morning in Karbala in the presence of Iranian Foreign Minister Zarif. 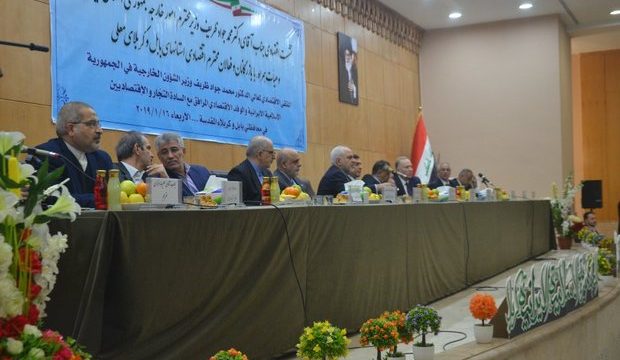 Tens of representatives from Iranian and Iraqi businesses came together Wednesday morning to confer on ways to boost trade and economic relations.
The business forum was attended by Iranian Foreign Minister Mohammad Javad Zarif and his accompanying high-ranking delegation, as well as governor of Karbala Aqil Al-Turaihi and Iranian Ambassador to Baghdad Iraj Masjedi.
Speaking at the forum, Consul General of the Islamic Republic of Iran, Mirmasoud Hosseinian, noted the holding of an economic session last year with participation from over 250 Iranian and Iraqi industrialists and business people, as well as a specialized exhibition organized by Iran in Karbala as two successful cases of boosting trade cooperation between the two sides.
The governor of Karbala, for his part, said the reason for Zarif’s presence and his efforts to organize the business forum in Karbala is the positive prospect for cooperation between the two countries in various fields, particularity in trade, agriculture and industries.