TEHRAN (Basirat)- At least six members of Jordan's security forces were killed Tuesday in a suicide car bombing launched from the Syrian side of the border in what the government suspects was an attack by ISIS militants. 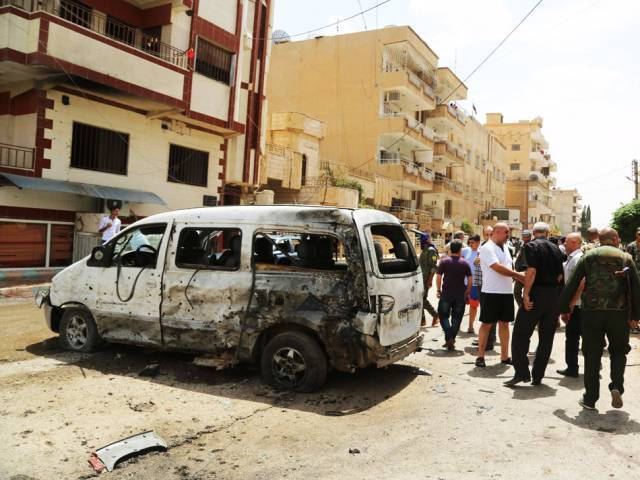 The car bombing, which Jordan's government described as a "cowardly terrorist attack," killed four border guards, a civil defense worker and a national security official, a military statement said.
Gen. Mashal Mohammad Al Zabin, King Abdullah II's adviser for military affairs, ordered the northern and northeastern border areas with Syria closed, according to the military. Security officials will consider any individuals or vehicles in the area without prior coordination as enemy targets, the military said.
Nasser Judeh, Jordan's foreign minister and deputy prime minister, said that "it doesn't take much imagination" to know that ISIS was behind the attack.
Judeh said that members of ISIS, whom he called "murderers," had infiltrated some 100,000 people from the border area. But he denied suggestions the terror group had penetrated refugee camps.
There's been no claim of responsibility for the attack.

'Strike with an iron fist'

The attack took place at 5:30 a.m. local time (10.30 p.m. Monday ET) in an area known as the Berm, along Jordan's northeast border with Syria.
The target was a military outpost providing services for a refugee camp in al-Rukban, home to 60,000 Syrians denied entry into Jordan. It's near both countries' borders with Iraq.
The car, driven by a suicide bomber, traveled at a high speed out of the camp, avoiding gunfire from Jordanian forces, before detonating at the outpost, the armed forces statement said.
The military "destroyed several hostile attacking vehicles" nearby, the armed forces statement added.
Visiting military leadership in the wake of the attack, Abdullah vowed that Jordan would "strike with an iron fist anyone who attacks or attempts to harm its security and borders."
The military statement said that the "cowardly terrorist attack only adds to the Jordanian armed forces' resolve and determination to fight terrorism and the terrorists and their dark ideology."
Judeh earlier condemned the attack on his official Twitter account.
"Terrorists strike again this time against our border guard," he wrote.
"A number of fallen and injured Jordanian heroes. This evil will be defeated."

Jordan, a key U.S. ally in the region, has foiled many border infiltration attempts and terror plots in recent years, including a thwarted ISIS plot in March that officials said was aimed at military and civilian installations.

Successful attacks have generally been a rarity. But Tuesday's bombing was the second deadly attack on Jordanian targets in recent weeks, shaking a nation that prides itself on projecting security and stability in a turbulent region.
Five people, including three intelligence officers, were killed in a June 6 assault on a Jordanian intelligence agency office in the country's largest refugee camp, Baqaa.
Jordan foils 'criminal plot linked to ISIS' 01:46
A suspected gunman was arrested later that day; no claim of responsibility was made.
Jordan is one of the most active Arab members of the anti-ISIS coalition carrying out airstrikes on the terror group's targets in neighboring Syria and Iraq.
The kingdom has had a high military presence along its borders with both countries, particularly since ISIS declared its so-called caliphate over parts of Syria and Iraq.
Jordan says it is hosting more than 1 million Syrians, about 650,000 of whom are officially registered as refugees with the United Nations. Over the past year, the kingdom has restricted the entry of Syrians, citing security concerns. A small number are permitted in daily after having been vetted, creating a backlog at camps.
The restrictions on refugees have drawn criticism, but Jordanian officials have defended the practice.
Error Report
0