Sayyed Nasrallah on 40th Anniversary of Islamic Revolution: Our Axis Is on Road of Victory

Tehran (Basirat) :Hezbollah Secretary General Sayyed Hasan Nasrallah spoke Wednesday on the 40th anniversary of the Islamic Revolution in Iran, saluting the soul of the great Imam Ruhollah Khomeini and listing the major developments that took place in Iran on various levels after the revolution. 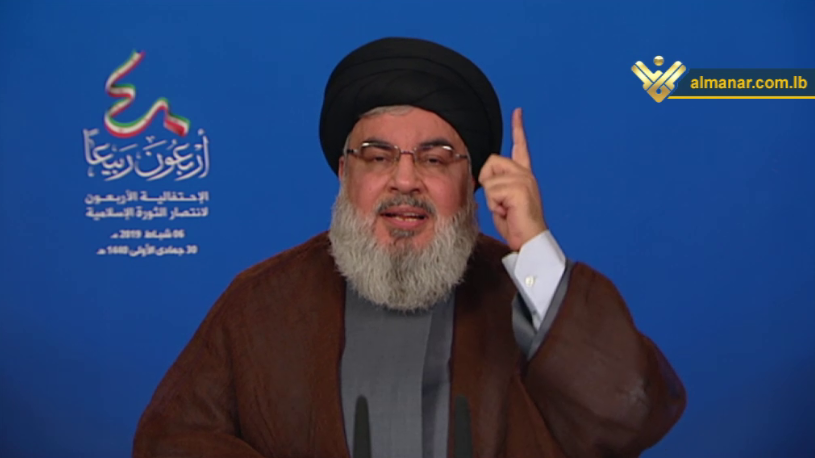 "We speak about Iran because it is the 9th out of 13 influencing countries in the world developments. It was ruled by an oppressive dictator who dubbed himself "the king of kings”, excluded the country’s religious and Islamic culture and submitted it to the US permitting the latter to steal its oil and have full control over it. 60,000 US counselors led Iran under Pahlavi’s who was the police man of the Gulf and had a strategic relation with Israel, he even gave it Iran’s oil for free…” Sayyed Nasrallah said.

He added: "Imam Khomeini, the great and significant cleric who had a courageous character, a heart that did not know fear, and a determination that couldn’t be undermined, came out at the beginning of the 60s after having followed up the events, planned a revolt, and stood in the face of the Shah who was preparing to sign a deal with Israel which would’ve destroyed Iran economically. This is the revolution we are celebrating its 40th anniversary today, it started with one man who stood up for the sake of Allah and without having any selfish or material benefits for himself.”

"Those men who led the revolution suffered from torture, imprisonment, oppression, expulsion and murder yet did not give up. Instead, the Imam spoke against the relation with the US and Israel and highlighted the importance of the Palestinian cause. He also spoke about the agriculture that was destroyed by the Shah, the corruption, hunger, deprivation, poverty, disease…”

"On the 11th of February, 1979, the revolution triumphed and the US and Israeli counselors were driven out of the country as the alignment was cut and the real independence was attained, and after 40 years it is still preserved, making Iran in the forefront of the independent countries in the region,” his eminence explained.

He went on: "They stood firm in the face of the 8 year global war that was waged against them under the leadership of the US, Soviet Union and Gulf and Arab states. It triumphed and started rebuilding itself.”

In this context, Sayyed Nasrallah stated a list of challenging developments that Iran achieved throughout these 40 years.

– After victory, Iran’s population was 30 million, today it is 80 million.

– After victory, Iran had 232 university and educational establishments, today it has over 3,000.

– Iran today produces over 95% of its defense weapons and exports five billion dollar worth weaponry.

His eminence explained that "I’m not denying that poverty does exist in Iran for several reasons on top of them are the sanctions and internal divisions, but we have to be fair in the data we present, especially that Iran lies in the eastern part of Asia in the Arab and Islamic world which imports most of its needs, and all that is the outcome of it’s great efforts, sacrifices, and persistence.”

"This revolution brought religion back to life, not just Islam, it brought back people’s faith in themselves, in God and the divine equations, and in His power to bring victory,” Sayyed Nasrallah said.

"What I mentioned are facts even though most international media tries to disfigure the image of Iran, while concealing the actual crimes of their own leaders. Some claim that it is an Israeli-Iranian war or a Saudi-Israeli conflict, and this is untrue… this is literally a US war on the Islamic Republic in Iran and Saudi is only a tool in this war, so are several other Gulf States…” he added, asking: "Why does the US insist on its war on Iran? First, because Iran is an independent state and makes its own decisions, oil, gas, metal and wealth and does not submit to the US, and the latter cannot tolerate that. Second is Iran’s regional position and stance toward the oppressed countries and Al-Quds.”

"If the entire world abandoned Palestine, Iran would never abandon Al-Quds and the sacred places,” his eminence stressed.

Sayyed Nasrallah further reiterated that neither ‘Israel’ nor the US are capable of waging a war on Iran because the outcome will not be for their benefit.

Locally, his eminence assured that Iran is ready to help Lebanon in various fields, and it could back our country in the process of development, security and education without asking for any return.

He pointed out that the Islamic Republic is ready to solve our biggest problem in the government today which is electricity. It even offered Lebanon a deal to build highways that would solve it’s traffic issue for fifty years, Sayyed Nasrallah said, wondering: "Would the Lebanese cabinet dare to approve those Iranian offers?”