Syria in Past 24 Hours: US Army Transferring 50 Tons of ISIL's Gold

TEHRAN (Basirat): The US army is taking ISIL's gold treasure that is estimated to weigh around 50 tons from Eastern Syria to America, a source close to Kurdish forces said Sunday. 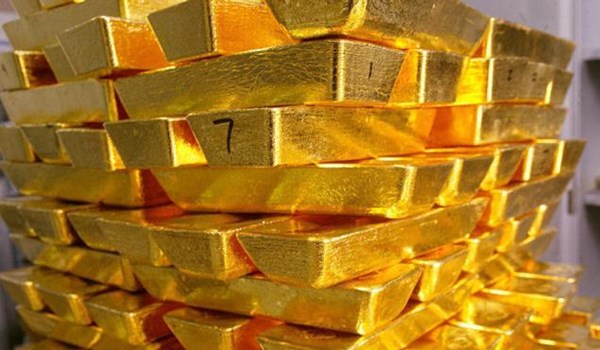 Deir Ezzur
The Kurdish-language Bas News quoted a Kurdish source as saying that the Americans have transferred tens of tons of the gold ingots they have seized from the ISIL terrorists in Baghouz region in Southeastern Deir Ezzur to their own country and only kept a small portion of the treasure to be given to the Kurdish fighters.
The source who spoke on the condition of anonymity reiterated that about 50 tons of ISIL's gold has been sent to the US from the US military base in Kobani in Northeastern Aleppo.
The report comes as the US has been using the airport in Southern Kobani for transferring consignments and military equipment in recent years.
Also in the past 24 hours, a senior official of the Syrian Democratic Forces (SDF) revealed that ISIL terrorists use Turkish visas to travel to and from Syria.
Mustafa Bali, the director of the SDF's Media Center, released the images of visas issued by Turkey for the ISIL terrorists in the town of Baqouz in Southern Deir Ezzur.
He added that tens of other similar visas have also been discovered, noting that they prove Turkey's collaboration with the ISIL for the free trafficking of its members to Syria.
The visas released by Bali also showed the terrorists' easy trafficking from Turkey to Syria.
Turkish President Recep Tayyip Erdogan had announced last month that Turkey's presence in Syria is legal based on Adana agreement, concluded by Ankara and Damascus in 1998, while one of the most important paragraphs of the deal is preventing the traffic of terrorists to Syria and Turkey by both states.
Hama, Idlib
The Pakistani government is participating in house-building projects in Idlib province near the border with Turkey.
Media activists affiliated to the militant groups reported on Sunday that Islamabad is constructing a big township in the Northern parts of Idlib province, adding that over 1,500 houses are being built in the Northeastern parts of al-Dana region in Northern Idlib which has been occupied by al-Qaeda-affiliated terrorists and Wahhabi dissidents in Syria.
The move comes as Pakistan is facing an unprecedented financial crisis and is under international pressures for supporting militant and terrorist groups in its deprived areas along the country's borders.
The US-led coalition along with allies, including Saudi Arabia and Turkey, are attempting to keep the terrorists in Syria, specially Idlib province while the Syrian army is cleansing all militants from the country.
Also in the past 24 hours, the Syrian army dispatched fresh troops and military equipment to Hama and Idlib provinces to conduct operations against the terrorists in response to their attacks on safe regions in the Northern part of the country, media reports said.
Large military convoys comprising hundreds of Syrian Army troops together with a large number of trucks carrying different kinds of military convoys have been sent to the army's military bases in Idlib province, the Arabic-language Al-Watan newspaper reported.
It noted that the Syrian Army's military convoys arrived in Northern Syria as government troops are preparing to conduct a vast operation against the terrorists in the region.
The report came as the terrorists stationed in Southern Idlib targeted and hit Mahradeh power plant and the village of al-Safsafieh in Northern Hama and the town of Jourin in Northwestern Hama, causing heavy financial losses on the power plant.
The daily reported that the Syrian Army also responded to the terrorists by pounding the movements and positions of Tahrir al-Sham al-Hay'at (the Levant Liberation Board or the Al-Nusra Front).
The Syrian Army's artillery units heavily pounded Tahrir al-Sham's military positions and movements in the surrounding areas of Ma'arkabeh, al-Latamanieh, Kafar Zeita and Mourek in Northern Hama and Ma'arat al-Numan in Southern Idlib, destroying several positions of terrorists and inflicting heavy losses and casualties on them.
Also in the past 24 hours, the Syrian Army pounded the military positions and movements of Tahrir al-Sham al-Hay'at and its allied terrorists in Southern Idlib and Northwestern Hama in response to their continued attacks on government forces, inflicting heavy losses and casualties on them.
The Damascus Army's missile units destroyed a command center of Tahrir al-Sham, West of Kafar Naboudeh, South of Idlib, and Northwest of Hama city, killing a number of terrorists, including a senior commander, nom de guerre Mahd Yousef.
The Syrian Army's artillery and missile units also pounded the military positions of Tahrir al-Sham and its allied militants in Saraqeb city and its surrounding areas, Southeast of Idlib that is one of the main bases of terrorists.
Several key positions and arms depots of the terrorists were destroyed in the Syrian Army attacks, killing a number of militants.
The Syrian Army's missile and artillery units also pounded the military positions and movements of Jeish al-Izza terrorists near Ma'arkabeh and al-Latamanieh city in Northern Hama, destroying two military vehicles and killing a number of militants, including a notorious commander named Hesham Abdolkarim Mostafa.
Homs
The US-backed terrorists in al-Tanf region near the borders with Iraq are still preventing civilians' exit from the occupied al-Rukban camp, field sources said, adding that only a small number of people have succeeded in escaping to areas controlled by the Syrian army.
The sources in Homs province reported that the terrorists in al-Tanf have blocked exit paths through the humanitarian corridors.
They added that the local council of al-Rukban had also on Saturday announced in a statement that civilians, except patients and traders, are not allowed to go through the passageways.
Chief of the Russian Reconciliation Center for Syria Sergei Solomatin said on Friday that "illegal armed groups inside the 55-kilometer zone impede the refugees’ exit from the Rukban camp, intimidate them and spread fallacy concerning the real intentions of the Russian side and Damascus".
According to reports, only 50 families have succeeded to escape towards the Syrian army points from al-Rukban camp.
The Rukban refugee camp is situated near the US base in al-Tanf, Syria, around which US forces in the area have established a 55 km 'de-confliction zone'.